Two months ago Corinthians of Brazil were looking like favourites of the Copa Libertadores, whose group phase kicks off on Tuesday.

Coach Tite had taken the Sao Paulo giants to victory in the 2012 Club World Cup.  After some time off, plenty of it studying European football, he returned to form a team just as solid as that of 2012 but much more eye-catching.  How would they fare in the Libertadores?

We will never find out.  The big money arrived from China, carrying with it the heart of the side.  The key playmakers Jadson and Renato Augusto left, followed by holding midfielder Ralf and centre back Gil.  Centre forward Vagner Love and teenage winger Malcom were lured to France.  Tite has had to go back to the drawing board.  His 2016 Corinthians may still win the Libertadores – but they will have to regroup and find themselves during the course of the competition.

Much the same now applies to Boca Juniors.  After the great Corinthians sell off, Boca seemed natural replacements as Libertadores favourites.  After all, Argentine clubs have had a grip on continental titles in the last couple of years, and Rodolfo Arruabarrena’s Boca completed the domestic league and cup double in December.  With Dani Osvaldo returning to partner Carlos Tevez up front and key midfielder Fernando Gago returning to fitness, the squad appeared to have both the depth and the  quality for the challenge ahead. 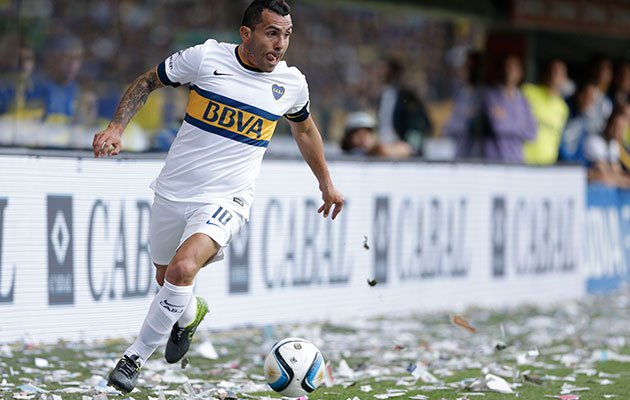 Boca Juniors’ Carlo Tevez may be paying the price for not having a proper break.

But if the first big story of the South American summer was the break up of the Corinthians side, then the second has been the derailing of Boca Juniors.  Their pre-season form was poor, leading former club idol Juan Roman Riquelme to declare that there was one positive – the team could not possibly play as badly when the competitive matches started.

Maybe not.  But they could play worse.  They began their league campaign a week ago with a tame 0-0 draw away to little Temperley.  In midweek they were massacred 4-0 by San Lorenzo in the Supercup.  And on Sunday they went down 1-0 at home to Atletico Tucuman.  What on earth has suddenly gone wrong?

Some of this clearly has to do with Tevez.  On his return last year he carried on where he had left off at Juventus, where he had just completed the one undeniably great season of his nine year European sojourn.  There were plenty of times at the back end of 2015 when he tipped the balance in Boca’s favour.

At the front end of 2016, though, he is looking horribly out of sorts.  In part it is surely a reaction to playing right through last year.  The loos of his strike partner Jonathan Calleri – now on loan at Sao Paulo – may also be a factor.  Calleri’s current coach, his compatriot Edgardo Bauza, concedes that Calleri is no technical wizard.  But he is quick and eager, full of movement.  Osvaldo is more experienced and proficient, but less mobile, and his style has yet to dovetail effectively with that of Tevez.

The problems, though, go beyond one player or even the strike partnership.  Arruabarrena is looking thoroughly lost in terms of constructing the collective balance of his side.

Against Temperley he went with a conventional 4-4-2 with a diamond midfield – which perhaps did not function well because Tevez operated too deep, invading the space of playmaker Nicolas Lodeiro.  For the subsequent two games Boca’s coach reverted to a back three – a system which makes specific demands of the centre backs.  First, two of them must be able to carry the ball out of defence.  Secondly, the wide pair must have the pace to deal with playing in wide open spaces.  In Boca’s case, neither of these conditions apply.

The formation has left Daniel ‘Cata’ Diaz looking especially vulnerable.  He was never the quickest of centre backs, and at the age of 36 it is unfair to expect him to cover great swathes of space.  He was exposed time and time again against San Lorenzo, and also in the first half against Atletico Tucuman, when the provincial side took the lead.
After the interval an injury forced Arruabarrena to make a change, and he reverted to an orthodox back four.  There was an improvement, with the odd hopeful sign of an understanding being constructed between Gago, Tevez and Osvaldo.  But Boca were unable to find an equaliser, and the unexpected defeat may well cost Arruabarrena his job.

Boca Juniors do not make their Libertadores debut until next Wednesday, when they make the trip north to face Deportivo Cali’s promising youngsters.  They may still go on and win the continental title.  But, whether under the present coach or a replacement, they will have to regroup and find themselves along the way.