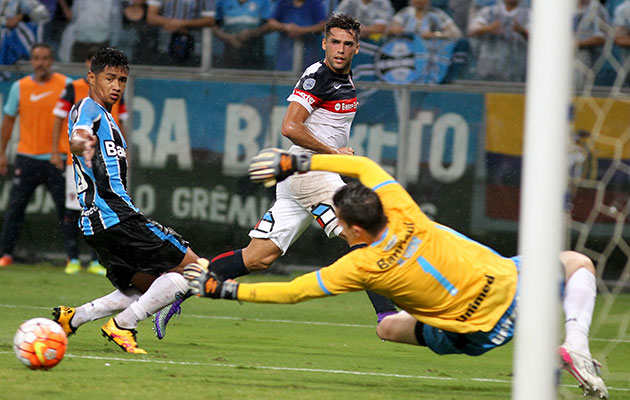 After a hectic month’s action, this is the last week in the Copa Libertadores before a brief pause for World Cup qualification.

With the group phase approaching the half way stage, the main comparison with Europe’s Champions League is already clear.  Europe has a near monopoly on the top quality players, most of the best of them concentrated in a handful of clubs.  As a consequence, there are huge gulfs between the teams.  The giant clubs are often not truly tested until the quarter finals.

The Libertadores, meanwhile, can be competitive right from the word go.  The biggest clubs are usually in a state of flux, selling their best players – bringing them closer to the pack.  Then there are the logistical problems – long, difficult journeys and tricky conditions such as altitude.  The tournament, then, contains a level of unpredictability than can be both charming – because it is refreshing to be surprised – and frustrating – because it is the fruit of a tree poisoned by economic weakness.

Only two teams, for example, still have 100% records – and one of them, The Strongest of Bolivia, are one of a handful of clubs who have only played twice.  (The other 100% team is Atletico Nacional of Colombia, lifted by the wonderful displays of 19 year old striker Marlos Moreno – the chance for youngsters to make a name for themselves is a big Libertadores plus point).

Only three teams have yet to pick up a single point – and none of them have been disgraced.  Melgar of Peru have gone down to three single goal defeats, and took the lead against Atletico Mineiro of Brazil, one of the favourites, in a game where a late rally nearly earned them a draw.  Much the same is true of Cobresal of Chile – they have suffered three single goal defeats, the first (against Corinthians of Brazil) the consequence of a last minute own goal.  Trujillanos of Venezuela did go down 4-0 at home to River Plate – the final score, though, disguises a good first half hour.  And those expecting a massacre in their second game – a trip to the extreme altitude of La Paz to face The Strongest – were surprised to see that they were only beaten 2-1.

Of the 11 countries involved, so far only four have managed to chalk up more wins than defeats – and the list does not include Argentina, who have provided the last two champions.  It does, though, include Brazil, despite the fact that none of their five representatives managed a victory last week.  Also with more triumphs than losses are Mexico, Colombia and, perhaps surprisingly, Bolivia. Between 2001 and 2011 not a single Bolivian side made it out of the group phase.  Things have looked up in the last few years, and this trend has continued.  The Strongest’s opening day win away to Sao Paulo is a historic result. If they can take advantage of altitude and win their remaining home games they should make it safely through to the last 16.  Their local rivals Bolivar, though, may well live to regret giving away a last gasp equaliser against Boca Juniors on Thursday night.  Two home points dropped could make all the difference.

One of the week’s most interesting attractions is the game featuring the other two teams in this group.  This is a crunch tie for Colombia’s Deportivo Cali, with one point and no goals from their first two matches, who face Racing of Argentina, who beat Bolivar at home and drew away to Boca.

The pressure, then, is on the youthful Cali side.  A win will put them right back in contention, but defeat will leave them struggling.  It is the biggest game in the young careers of some of the Cali hopefuls, such as rangy centre forward Harold Preciado.

There is also plenty at stake in Buenos Aires, where 2014 champions San Lorenzo of Argentina host Gremio of Brazil.

Last week ‘s 1-1 draw in Porto Alegre showcased two broadly similar sides.  Under interesting young coaches (Pablo Guede of San Lorenzo and Gremio’s Roger Machado) both want to dominate possession and play good football, but for the moment they have more ambition than ability.  San Lorenzo shaded the encounter in Brazil – but with just two draws from three games they are the side that most needs a win in the match that should stand out as a highlight of week five in the Copa Libertadores.