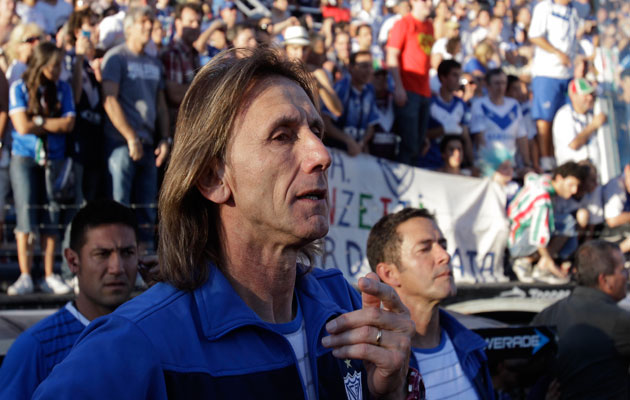 The countdown is on towards the next set of competitive matches for South America’s national teams – the Copa America is only three months away, with the 2018 World Cup qualifiers getting underway soon afterwards.

After missing out on every World Cup since 1982, it might have been expected that Peru would put special effort into getting their preparation right this time.  Instead, they are the last nation on the continent to name their coach, with Argentina’s Ricardo Gareca on his way up to Lima to sign a contract in the next few days.

A centre forward in his playing days, Gareca has some history against Peru.  He was in charge of club side Universitario for a spell in 2007/8 which included winning the domestic title.  And he also played a significant part in Peru’s failure to make the 1986 World Cup.  They only needed a draw away to Argentina to seal their place, and were 2-1 up going into the last ten minutes.  But then Argentina struck the decisive equaliser.  Many sources give the goal to captain and centre back Daniel Passarella – but it was clearly Gareca who turned the ball over the line after Passarella’s shot had been pushed onto the post.

But no one can take away the credit if Gareca manages to qualify Peru for Russia 2018.  The task is herculean.  Only goal difference prevented Peru from going to France 98.  But subsequently they have not even come close.  In the course of the last three World Cups Ecuador, Paraguay and Colombia have recorded their best ever performances in the tournament – which also applies to Chile, with the exception of the competition they hosted in 1962.  Venezuela are the only country in the continent not to have made it to a World Cup, but they too have made giant strides.

Peru, meanwhile, seem to have gone backwards.  The most damning evidence comes in their away record in qualification since coming close in 1998.  Their subsequent 35 trips have yielded 2 wins, 6 draws and 27 defeats, with 22 goals scored and 78 conceded.  Their last win on the road in World Cup qualification was nearly 11 years ago.  They have gained just one point from the last 21 away fixtures.   It all points to a side which has lost confidence in its own ability to compete.

The undoubted highpoint of Gareca’s coaching career is his four year spell with Velez Sarsfield of Argentina, when he won a number of domestic titles and came very close to taking the team to the final of the 2011 Copa Libertadores.  At Velez, though, he had the advantage of working in the stable, organised and competent atmosphere of a well run club – one, to boot, with which he was familiar from his playing days.  In an admittedly brief spell last year with Palmeiras of Brazil, deprived of these advantages, he floundered.  And the Peru job is even more challenging.

The Peruvian FA appear to have realised this, putting together a parallel long term plan while Gareca wrestles with the short term.  The idea is to hire Colombian coach Reinaldo Rueda – who took Ecuador and Honduras to the last two World Cups, but who initially made his name as a youth specialist.  Rueda was approached to take charge of the youth set up, and groom an Under-23 team which would step up to form the base of the senior side after the next World Cup.  Negotiations seem to have broken down, but it was a bold plan, and one which implicitly confesses that Ricardo Gareca may be in for a rough ride over the next three years.

This is proving a busy time for teenage Paraguayan support striker Sergio Diaz.  Earlier this year he provided some flashes of genuine talent – and occasional moments of immaturity – representing his country in the South American Under-20 Championships.

On Sunday he was in the starting line up for Cerro Porteno in the Paraguayan ‘super-classic’ against Olimpia, and gave many more hints of his huge promise.  His elusive running with the ball was often a problem for the opposing defence, and he was brought down in the area for a first half penalty which decided the game in Cerro’s favour.

And this week there will be little time to celebrate his 17th birthday.  He is the star turn in the Paraguay attack as they host the South American Under-17 Championships.  One hopes that a potential superstar is not being over-played at this formative stage in his career.