During the 11 year reign of coach Oscar Washington Tabarez Uruguay have become a force once again. In his first spell in charge he took them to Italia 90. But thereafter they only reached one of the next four World Cups – in 2002, when they fell in the group phase. Since he returned in 2006 things have been different. They reached the semi finals of the 2010 World Cup, won the Copa America the following year and are currently well placed to qualify for Russia 2018.

Key to this success has been the importance attached to the national Under-20 team. This is based on a simple, undeniable observation; in the age of global football it is impossible for a country as small as Uruguay (population little over 3 million) to hold on to its best players. They will inevitably be sold abroad. The national youth teams, then, need to play a key role in their development. It is here that Uruguay establish a bond between the promising youngster who will soon be living abroad. He is given a crash course in the tradition and identity of the sky blue shirt. And the Tabarez project goes much further. His team of scouts scour the country looking for youngsters with the characteristics necessary to succeed in international football – speed of movement, speed of thought, speed of technical execution.

So the South American Under-20 Championships, which kick off this week in Ecuador, represent an important moment for Uruguayan football. Results are not the big priority – though the pressure is on to become one of the four teams from the continent who make it through to this year’s World Under-20 Cup, to held in South Korean in May and June. This is no foregone conclusion – both Brazil and Argentina have failed to qualify recently. Since Tabarez took over the senior side, though, and put his project into operation, Uruguay have always made the cut – which is important because taking part in such a competition against the best young players from all the continents is a thoroughly useful stage in the development of the players.

At the end of the day, though, it matters little whether the team make it all the way to the final of the World Under-20 Cup – as Uruguay did in 2013, when they lost to France on penalties; or whether they go out in the group stage, as happened in 2011. The success or failure of every crop of players is measured by one criteria – how many of them go on to become important players for the senior side. 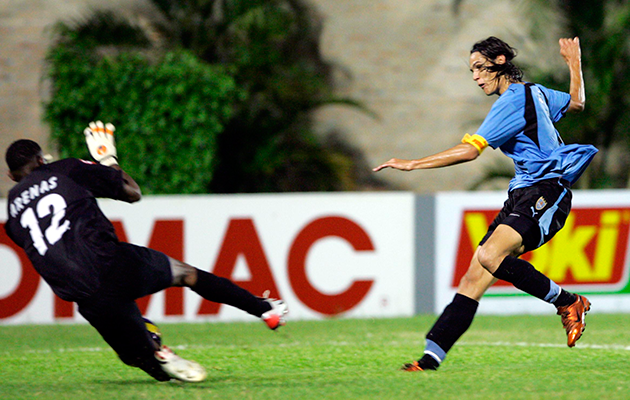 Edinson Cavani scores against Colombia during a South American under-20 match in 2007.

Here Uruguay have been extraordinarily successful. The 2007 Under-20 team produced Luis Suarez, Edinson Cavani and Martin Caceres. Two years later came Nico Lodeiro, Abel Hernandez, Gaston Ramirez and Sebastian Coates. The 2011 side had Matias Vecino. The 2013 graduates include Jose Maria Gimenez, Diego Rolan, Gaston Silva, Diego Laxalt and Giorgian De Arrascaeta, all of whom have appeared, or at least been in the squad, for the Russia 2018 qualifiers. The 2015 goalkeeper Gaston Guruceaga has already received senior call ups, as has midfielder Nahitan Nandez. And PSV Eindhoven attacking midfielder Gaston Pereiro may well come into consideration for a full cap.

The 2017 crop, then, have a lot to live up to. A few have already made a name for themselves. Lanky midfielder Rodrigo Bentancur, elegant and versatile as a left footed Lucho Gonzalez, will soon be swapping Boca Juniors in Argentina for Juventus. Striker Nicolas Schiappacasse, with a wonderful change of pace, impressed in last year’s Libertadores for little Uruguayan club River Plate, and has since moved on to Atletico Madrid B. And Joaquin Ardaiz is a well built, skilful left footed striker who will not be staying at Danubio for very long.

Over the next few weeks in Ecuador, can this trio live up to their billing? And who else might emerge to play a significant part in the future of the senior Uruguayan side? Oscar Washington Tabarez will be paying close attention.

Nick Bidwell’s Notes from Germany: RB Leipzig use Salzburg as feeder club, but not everyone is happy