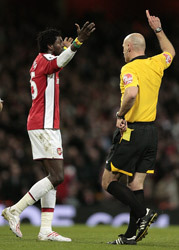 Arsenal striker Emmanuel Adebayor has accused Liverpool defender Alvaro Arbeloa of conning the referee in order to get him sent off in Sunday’s 1-1 draw.

Adebayor was shown a second yellow card in the 62nd minute for the challenge but the Togo international believes the foul did not merit a booking.

“I cannot say he [Arbeloa] cheated, but what he did was not fair play at all,” said the 24-year-old.

“The defender threw himself on the floor as if I put a knife in him.

“I don’t think I deserved a yellow card and just want the referee to go back and watch it on TV again,” he said.

Manager Arsene Wenger believes the dismissal cost his side victory and was furious with referee Howard Webb’s decision.

“I am convinced we would have won with 11 players,” said the Arsenal manager.

“We took control with 10 men, but imagine what it would have been like with 11?”

“It was very soft,” said Wenger of the second booking. “If we get red cards like that from opponents away from home then I’m very happy.

“It was not a red card, it was not a second yellow card. I don’t know what it was for and I’m sure he (the referee) doesn’t know.

“It’s frustrating because we had a nervy first half as we were under pressure to win this game and I knew we would finish very strongly.

“We played high up in the second half and we could not take advantage of the fact we were slowly taking control of the game because we were down to 10 men.”

“Part of our disappointment is that we did not use our numerical advantage but credit to Arsenal, who worked hard when they were a man down.”