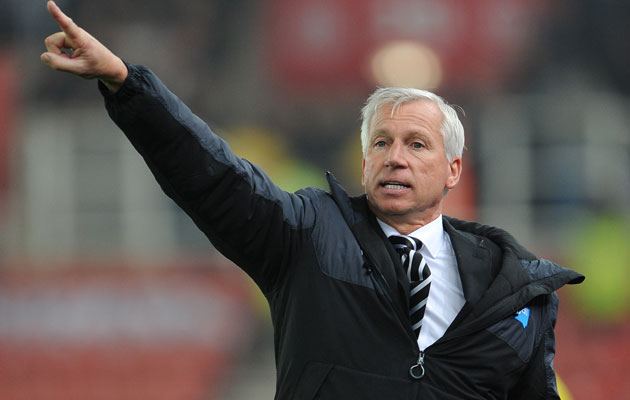 Alan Pardew admits he expects to have “serious conversations” with Newcastle owner Mike Ashley after Monday’s 1-0 defeat at Stoke.

Ashley told a newspaper reporter last week that Pardew was “finished” if Newcastle lost at Stoke – a remark he subsequently claimed was as a joke. But with Newcastle second from bottom of the table, without a league win, and with supporters demanding he be fired, there is a sense that time is running out for Pardew.

Ashley was in attendance at the Britannia Stadium to see yet another defeat for the magpies. In a run stretching back to last season, Newcastle have won only five of their 25 league games in 2014.

“We’ll have some serious conversations because he doesn’t want to lose and neither to do I,” said Pardew.

“I’ll probably speak tomorrow or the next day because this team needs to win games. I have to turn it around.”

“It’s a tough job, make no bones about that,” he said. “The fans are giving their honest opinion of what they believe. I looked at them at the end and clapped them to show I respect their views.

“I’m not going to hide from it. I know there is a big question mark about me being at this football club and the only way I can answer it is to do the job to the best of my ability and try and come up with answers. I’ve never really been in this situation before, it’s a bit unique. But I’m a professional football manager, that’s what I do and that’s what I’ll continue to do.

Asked how secure his position might be after another defeat, Pardew said he was in the dark.

“I don’t know,” he admitted. “It’s my job really to show to the players that there are 32 games left, to be strong and to show that there is a resilience. We find ourselves in a position where we’re not winning games and we’ve got to put that right. We need to get a win and we need to get it quick.”