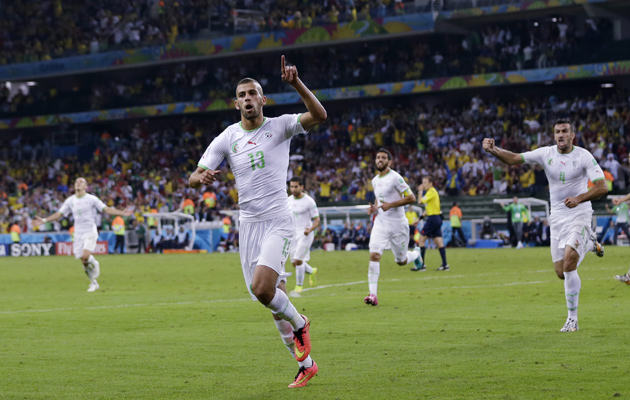 Match overview: Algeria reached the second round for the first time after recovering from an early setback to draw 1-1 with Russia in Curitiba. The Russians took an early after a swift attacking move saw Alexander Kokorin meet Dmitri Kombarov’s cross with a thunderous header. But Algeria fought back and secured a deserved equaliser through Islam Slimani. Algeria finished in second place behind Belgium, prompting wild celebrations among players and fans on the final whistle. In contrast Russia, the hosts of the next World Cup, headed home having collected two points from a possible nine.

Man of the match: Islam Slimani. The Sporting Lisbon striker confirmed his growing reputation with a well-taken goal.

Matter of fact: Algeria’s passage to the second round ensured two

Talking point: Russia’s coach Fabio Capello may have been the highest-paid manager at the tournament, but he failed to send out a team that could challenge for the last 16. Before flying out to Brazil, Capello extended his contract until 2018, when Russia host the next World Cup. But Russia’s poor performances in Brazil have drastically reduced the the chances of Capello seeing out his new deal.