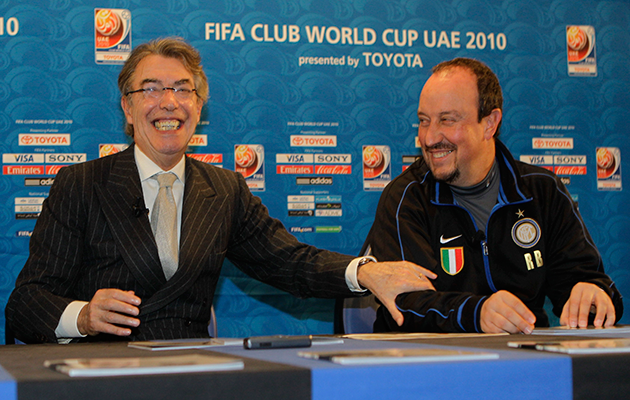 Former Inter president Massimo Moratti has admitted it was a mistake to have appointed Rafa Benitez to replace Jose Mourinho after the Portuguese had won a league, cup and Champions League Treble in 2010.

Moratti sold his share of the club to Indonesian businessman Erick Thohir in 2013, but he remained with the club as Honorary Chairman.

He did not question Benitez’s professionalism but said the former Liverpool man’s personality was not a good fit for Inter at that time.

Of Benitez, Moratti said he is “a great professional, but there was a huge difference between his communicative character and relationships [compared to Mourinho].”

“We made a mistake appointing him,” Moratti is quoted by La Gazzetta di Parma. “I didn’t do anything to annoy him, but it got to the stage where I actually wanted to because it seemed like we were not permitted to celebrate anything because we were living in a climate of terror and we all had to be careful not to offend anybody.

“There was no enthusiasm in this situation, and that is what you need to win things.”

Current coach Roberto Mancini, who made way for Mourinho when he left Inter in 2008, is back at the helm and Moratti believes he can lead the Nerazzurri into the Champions League next season. Inter are currently four points behind third-placed Roma with five games of the season remaining.

“I believe and hope we can do it,” he is quoted by La Gazzetta dello Sport.

“Mancini’s done it in England, he did it at Parma, winning the Scudetto [on the final day of the season], and he’s capable of doing it again.”