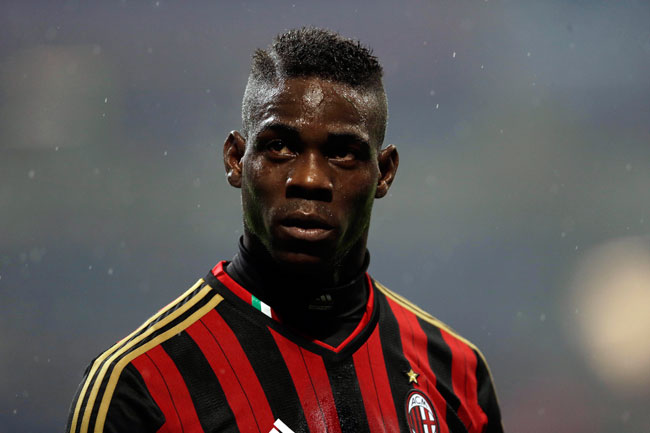 Mario Balotelli has been fined for the gesture he made towards Cagliari fans in Milan’s 2-1 win on Sunday.

Mario Balotelli has been fined £8,200 for making a provocative gesture to Cagliari supporters after scoring in Milan’s 2-1 win on Sunday.

The striker, 23, was booked for unsporting behaviour after scoring an 87th-minute equaliser. It was his eighth yellow card of the season, which means he will miss Saturday’s game against Torino.

Italy coach Cesare Prandelli, now operating on autopilot when it comes to discussing the errant striker, said earlier on Monday: “Balotelli will learn,”

Prandelli, who has dropped Balotelli in the past for misbehaving with his club, said he was encouraged by comments from new Milan coach Clarence Seedorf.

“Seedorf has used the right words with Balotelli,” said Prandelli. “I’m sure that with his help we can get the best out of Mario.”

“He will need a lot of love, he is a guy who we give a lot to and is important for Milan.”

Balotelli’s importance to Milan was illustrated on Monday night when he was voted Serie A striker of the year by his fellow professionals.

Balotelli’s international team-mate, the Juventus midfielder, Andrea Prilo, was voted Serie A Player of the Year for the second year in a row.