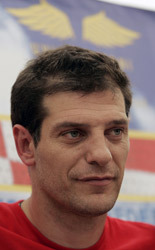 Croatia coach Slaven Bilic has described England as ‘predictable’ and claimed he ‘expects’ his side to win their World Cup qualifying group.

The countries meet in Zagreb on Wednesday with England eager for revenge after two defeats by Croatia saw them miss out on qualifying for Euro 2008.

“England can’t play good football because they play predictable football,” Bilic told The Sun. “I don’t know why. I would know that if I was training with them and speaking to them.

“As a national team manager you have to talk to them. If I was England manager I would find out because, really, I don’t know why they sometimes perform nowhere near what they can.”

Former West Ham and Everton defender Bilic went on to detail the unorthodox methods he employs to get the best of out his players.

“Sometimes I lie in the bed with my players,” he revealed. “I go to the room of (Vedran) Corluka and (Luka) Modric when I see they have a problem and I lie in bed with them and we talk for 10 minutes.

“You have to do it. Sometimes football managers think ‘If you do that you’re losing the distance and the authority’. No, you’re gaining.”

Bilic, who has been linked with the managerial vacancy at West Ham, also warned England his side have improved since their victory at Wembley last year.

“No one is fearing England,” he added. “If anyone should be worried about Wednesday, it’s England.

“I expect us to win the group. I expected that two years ago and now definitely so. My team is definitely better than the one that beat England twice.”

Croatia opened their Group Six campaign with a comfortable 3-0 victory over Kazakhstan on Saturday, while England laboured to an unconvincing 2-0 win over Andorra.