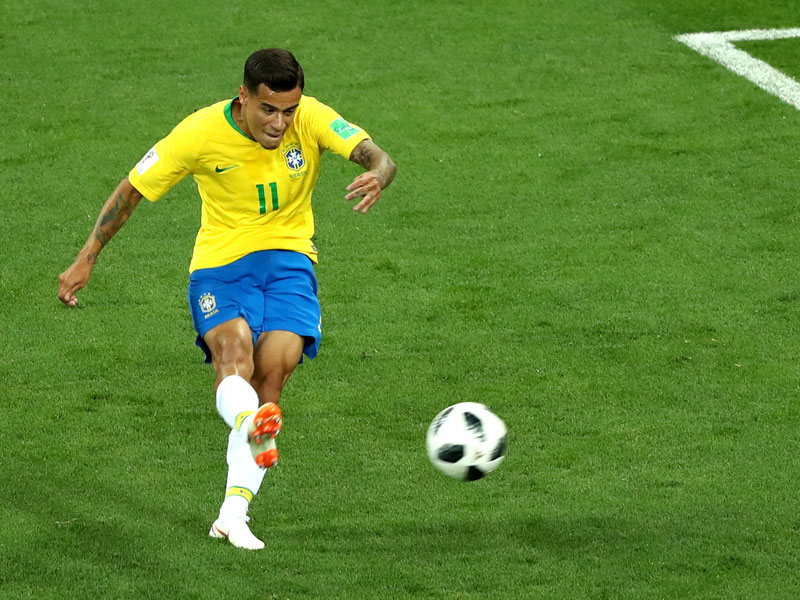 As so often in the last 18 months, Phillippe Coutinho was Brazil’s deadlock breaker in their World Cup opener against Switzerland, curling home a superb shot from just outside the area and crowning an impressive first 20 minutes from the five times world champions.

But things were not nearly so impressive from that point. Having taken the lead, Brazil sat back, trusting that the pace of their counter attack would help them kill of the game. Instead, little by little, Switzerland played their way into proceedings, and deserved to draw level in the second half, before managing to hold on against a late Brazilian surge.

“Until we scored, we had a strong volume of play,” said Brazil coach Tite after the game. “And then we sat too deep, which is not normal for us.”

Nor did it make much sense. Brazil’s new formation employs Coutinho as a genuine midfielder, operating to the left of Casemiro, the central holder. The attacking advantages of this were clear from the goal. The opposing defence are terrified of Neymar, and the extra attention they pay to Brazil’s number 10 opens up space for the number 11.

But this only makes sense when Brazil are in the opponent’s half of the field.  Sitting deep was impossible to understand in this game under any circumstances; against a centre forward as lumbering as Haris Seferovic, far better to keep him far from goal. But when the central midfield trio includes Coutinho and Paulinho, it becomes even harder to fathom. Coutinho has little defensive aptitude, and does his best work in the last 30 metres of the field. And Paulinho shines when the team press high, allowing him to burst into the box as an element of surprise. Sitting back prevents these two from doing what they do best. And in a situation where the opponents are forced to chase the game, opportunities on the counter attack will come naturally. There is no need to force the issue. But as Tite said, “anxiety was a big factor. We were in too much of a hurry, and when that happens, you lose precision at the vital moment.”

First night nerves, of course, are part of any World Cup debut. And a general view of the results so far serves as a reminder that it is never wise to jump to too many conclusions based on the first matches.

Certainly, in almost two years in the reign of coach Tite, Brazil have never before retreated so much and so early.  But it does leave a question hanging; why was this not corrected earlier? If Tite had identified this as a problem, why was he not able to change matters more quickly? Is the lack of a fixed captain a problem, leaving the team without a rigid leadership structure? And is Tite a victim of his own decision to drop centre back Marquinhos in favour of Thiago Silva? Marquinhos is his quickest centre back, and most apt to play in a high line. The veteran combination of Thiago Silva and Miranda may always be tempted to drop closer to goal.

It will be interesting to see the changes made, in approach if not in personnel, when Brazil face Costa Rica in Saint Petersburg in Friday’s second game. Having lost to Serbia, Costa Rica are already facing scoreboard pressure. Will they take risks, or hang on and hope? Whatever the answer, Brazil need to be prepared to impose their game – as they did against Switzerland, but only for the first 20 minutes.