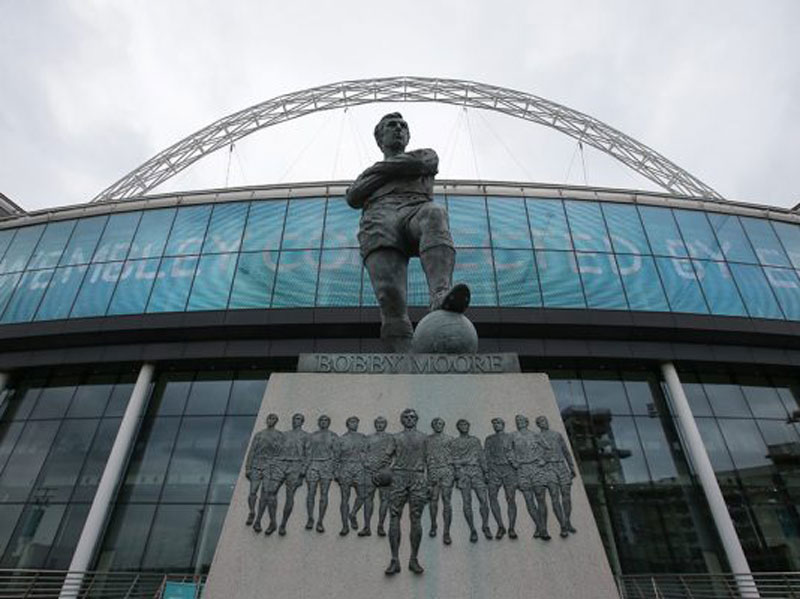 Whither Wembley? It seems on the cards that the billionaire Shahid Khan, owner of Fulham and in the USA the football club Jacksonville Jaguars, is still hoping to acquire the stadium. Negotiations of a sort have already been going on for a couple of years. The price now bruited is some £600million though it cost the FA £750million or so to rebuild completely the old stadium, where football had been played since 1923.

Wembley has been the domain of the FA only for 19 years. By comparison with another North London stadium such as Arsenal‘s, it took a surprisingly long time for the new Wembley to be erected. By the time the old stadium had been pulled down there was a yawning abyss between its accretions of history, not least the 1966 World Cup Final, and its disintegrating state. Under various different owners, it had been allowed to degenerate into a virtual slum, badly lacking in facilities, where urine was known to flow from the upper tiers from fans unable to find toilet facilities. But throughout the decades, it retained its allure. Italians called it the Temple of Football.

Shahid Khan seemed to be on the way to a deal those two years ago when there was talk of a £10million deposit being put down. I remember back in the 1950s when Wembley put on its first ever American football game. A large attendant surveyed the field with scorn. “Typical Yanks,” he said. “Brute force and numbers.” But there is little doubt that Jacksonville although so far from home would draw the crowds well beyond their present one Wembley game a season.

On the face of it, it seems that the current FA hierachy would not be be averse to selling the stadium, though this attempt would be met with bitter opposition not least from Sir Dave Richards, of Sheffield Wednesday, remembered for his casting vote decision which kept Fabio Capello so expensively in office when after a dismal World Cup he should have gone.

My feeling is that in one way or another, even if Khan does buy the stadium, England, as he appears to promise, will continue to play there. The Football Association talks somewhat vaguely of using the millions they’d receive for building facilities for developing young players. But as critics have pointed out, FA hierachies have a habit of being replaced.

Whatever the deficiencies of Wembley as it is, it’s hard to see a situation without it, and its accretions of history.

The death of Roy Bentley at the age of 90 has received rather less notice than it arguably deserved. Well before Nandor Hidegkuti, who tore the England defence to pieces with Hungary in November 1953, Bentley was playing for Chelsea as a deep-lying centre-forward.

A Bristolian, he joined his local club Bristol City after coming out of the Navy, quickly moving on for £8,000 to Newcastle United; quite a transition. Chelsea bought him for £11,000. Quick and strongly built, he changed from the inside right he had been at Bristol City into the orchestrator of a Chelsea attack which he led so to speak from behind.

Strong in the air he was a regular goalscorer and was capped by England, at first as an inside forward. In the 1950 World Cup in Brazil, he led the England attack. Previously, at Hampden Park, his 1-0 winning goal saw to it that Scotland did not send their team to Brazil. With infinite perversity, their selectors has announced that unless their team had actually won their qualifying group – FIFA indulgently had used the British Championship as a qualifying group for the top two teams – they would not send a team to Brazil. They stubbornly adhered to their fatuous promise, even though their team once hit the England bar.

Sunderland, now under new ownership, and relegated to what I still call the 3rd division, may yet regret their new owners’ decision to sack Chris Coleman, who was happy to stay as manager. Quite why Coleman ever took the job, after doing so well in charge of Wales, still baffles me.

Apparently and astonishingly he never even met the club’s American owner, Ellis Short, who has now made a generous financial sacrifice in parting with the club and setting aside huge debts. Down in the lower depths, it will be very hard for Sunderland to recruit the players they badly need.

With the World Cup fast approaching, at World Soccer we will update you with all the news related to the World Cup on our website. Make sure you know about the Qualified Teams, Groups, Friendlies, Dates, Fixtures, Stadiums and TV Schedule by clicking on the highlighted links.

Also feel free to check out our World Soccer 500 homepage – where we have put together lists of the 500 most important players on the planet.