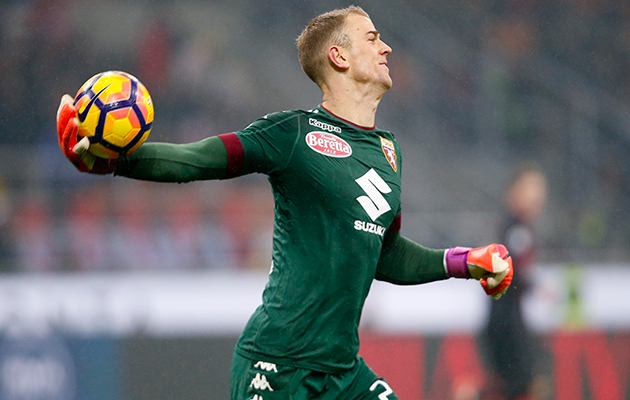 And now whither Joe Hart? Last weekend, keeping goal resiliently for Juventus, it was only in stoppage time that Hart was beaten with a splendidly taken effort by Juventus’ Gonzalo Higuain. Not bad for a ten-man team, depleted by the explusion of Afriyie Acquah just five minutes after Torino, in the Juve stadium, had taken the lead through a free-kick by Adam Ljajic.

Sinisa Mihajlovic, the Torino coach – not the most likeable and unbiased of players – went wild at the expulsion, following a second yellow card, and was sent to the stand.

Hart may have erred playing for England in the last European finals, but he saved the national team with his splendid saves against Slovenia earlier this season. Will Manchester City take him back or simply loan him out again? Torino would like to keep him, but they haven’t the money to buy him permanently.

So much, meanwhile, for Pep Guardiola’s surely misbegotten decision to get rid of Hart on the deeply dubious grounds that he wanted keepers who could be useful with their feet and distribution. Surely a secondary matter at the best of times and the best of times was hardly what City enjoyed with the keeper Guardiola preferred to Hart, Claudio Bravo, gave away goal after embarrassing goal.

In the last analysis surely a goalkeeper should be judged by his ability to stop goals being scored against him. That draw on Juve’s ground put an end to Juve’s series of 33 consecutive home wins.

And Higuain, the Argentinian striker whom Juve bought from Napoli? Hard to forget what happened to him in the World Cup Final versus Germany when the German goalkeeper, Manual Neuer, crashed into his head in mid-air and should certainly have been sent off. What would Germany, the eventual World Cup winners, have done then? Hard to imagine their ten men holding out against the Argentinians.

Meanwhile, Juve showed in Monaco what a compact and versatile team they are against a side which had created previous embarrassment for Manchester City, who could well have done with Joe Hart in goal when Monaco’s young flyers took them apart.

With a sudden late spurt, Portsmouth leaped to the title of League Two and will thus emerge from the shadows which have engulfed them for years, under the dubious aegis of foreign owners who failed them. True, it is not so long ago that Pompey under the ubiquitous Harry Redknapp won the FA Cup Final against a defiant Cardiff City, but the days when they dominated English football seem distant indeed.

Twice in succession they won the first division title, in 1949 and 1950, the second time only on goal difference, then calculated on a mathematical basis, from Wolves. In these days of post-match interviews and much publicised managers, it is interesting to remember that their then manager Bob Jackson, formerly the chief scout in office for five years between 1947 and 1952, was an almost anonymous figure. In contrast it is true with his predecessor Jack Tinn, known for his ritual before games of having his spats put on by the England international outside right, Fred Worrall. The story goes that when they contested the 1939 Final at Wembley against the favourites Wolves, they gained confidence when the book was brought into the dressing room to be signed by every player. The signatures of the Wolves team were shaky and plainly unsure. Pompey took heart and won 4-1.

Blackburn Rovers went down and out with a bang at Brentford, where an unexpected and impressive 3-1 win was not enough to save them from relegation; and after which, who could say? The absentee owners being the Indian Venky’s, loathed by the Blackburn fans.

That Birmingham City under the famed escapologist Harry Redknapp stayed up was controversial to a degree, given their penultimate victory against a Huddersfield Town team which for some obscure reason fielded no fewer than 10 reserves. The League asked for an explanation, then did nothing.