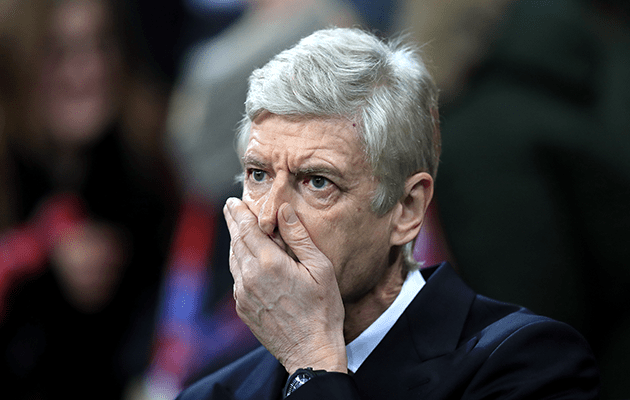 Arsenal are well and truly hoist with their own petard. Overwhelmed and overawed by Arsene Wenger, they allowed him to stay in office at the end of last season when he was arguably two years past his sell-by date.

To stories that they might appoint a director of football alongside him, which though it still ducked the true problem might at least have been some kind of a valid compromise, he sneered at the idea, saying, “I don’t know what a director of football means. Is it someone who stands in the road and directs play right and left? I don’t understand what it means. I’m the manager of Arsenal Football Club, I will decide what happens on the technical front. That’s it. Progession or regression. Changes can go both ways. It is a question of teamwork inside the club. Some coaches are only interested in managing the team and they are happy with it. I am not like that. I cannot change myself now… I have 40 years of experience at the top top level. I think I have a good knowledge of the game. I am who I am. That’s it.”

Except, alas, it isn’t. Such an ego will clearly never admit compromise, and knowing this, it was pathetic that the club simply bowed after yet another disappointing season which even ended without qualification for the European Champions Cup.

Wenger should logically have gone. That he hasn’t gone and is so averse to any kind of managerial executive beside him, that with the team in evident chaos, Arsenal have two alternatives.

Either they tell Wenger that whether or not he approved if it, an assistant will be appointed to work beside him. Or they simply, however expensively despite a contract which was only signed so recently, they must pay it up in full and dismiss him.

The defeat at Liverpool was sheer humiliation for Wenger, the team and the club. There has been much talk of Liverpool’s imbalance, of the defence being porous while the attack was splendid. On this occasion, the defence was never put under the remotest pressure; Arsenal did not even contrive a shot on goal.

Certainly their players were an invertebrate lot, subject to howling defensive errors and ineptitude in midfield and attack. How ironic it was that in a long interview published on the morning of the match, the talented Aaron Ramsey, a distracted mediocrity on this occasion, should have declared how happy he was with the team’s adopting a three at the back formation. There were in fact occasions when Ramsey himself, untypically, was bizarrely distracted.

Given the anaemic display by almost every one of the players bar Petr Cech in goal, it was surprising that Wenger could find no place even as a substitute for the newly-signed ruggedly efficient Kolasinac. While the decision to transfer a defender as resilient as the Brazilian Gabriel makes little sense in the current circumstance. And Per Mertesacker, a hero of the FA Cup Final. would surely have made a better defensive job of it than young Holding.

This is a club and a team in chaos, and it is hard to see just how it can extricate itself.

Tickets for Arsenal games can be found at Football TicketPad.

Another frustrating day for the Gunners’ neighbours and local rivals Tottenham, at Wembley. Burnley having so surprisingly and enterprisingly triumphed at Chelsea, now forced a later draw with their new striker from Leeds, Chris Wood, recently so prolific in the Championship.

Spurs, like the Gunners before them, are finding Wembley not much of a home ground and I wonder whether things will materially improve. The trouble is that every club wants to play there; even with a crowd as huge as watched last weekend’s game, the huge advantage of playing at the so much smaller – both on and off the field – White Hart Lane is a thing of the past.

And Crystal Palace? Suffering evidently from the wish of their Dutch manager radically to change their tactics with the foreseeable dire consequences. Frank De Boer should cut his coat according to his cloth, but then surely Palace should have known about his predilections when they signed him.

Chelsea aside, this is not a happy time for London managers. At struggling West Ham, Slaven Bilic seems to have lost his way, both on play and transfers.

As for Liverpool, irresistible against Arsenal, they hardly missed even Coutinho, so keen to join Barcelona.