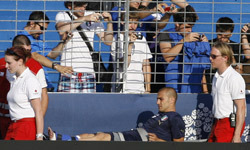 Italy captain Fabio Cannavaro has been ruled out of Euro 2008 after suffering an ankle injury in training.

Cannavaro collided with team-mate Giorgio Chiellini on Monday and was stretchered off by medical staff before being taken to hospital.

The Italian medical staff had been hopeful that Cannavaro’s injury was not serious, but scans have shown up ankle ligament damage.

A statement on the Federation’s official website, www.figc.it, said: “The news we feared was confirmed in Baden late on Monday evening. Fabio Cannavaro will say goodbye to our European adventure, before it has even begun.

“The captain has suffered torn ligaments, which happened the moment his foot made contact with the ground. His ankle twisted awkwardly.”

He will now be forced to sit out the upcoming European Championship, with the length of his absence yet to be determined.

The statement also confirmed Fiorentina defender Alessandro Gamberini has been called up as a replacement.

The loss of Cannavaro is a huge blow to Italy’s chances of adding the European Championship crown to the World Cup title they won two years ago in Germany. The Real Madrid defender was a key member of Italy’s side then, and was named FIFA World Player of the Year for his performances.

Italy open up their Euro 2008 campaign against Holland on 9th June before the world champions play Romania and France in Group C.