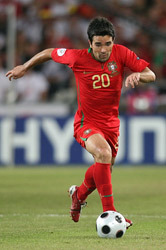 Deco joins from Barcelona on a two-year deal for a fee of about £8m.

The 30-year-old was recently told by Barca’s new coach Pep Guardiola that he was free to pursue his career elsewhere.

“It is good for me to be here and first of all I am very happy to be here,” Deco told Chelsea’s official website.

“I am sure I have come at the right time to do great things and be able to help Chelsea go back to the way it was and come back to being the first one, not only in England but also to win the Champions League that has been their dream for so long,” added Deco.

“That has been their dream for so long. The Premier League is a great league and it is getting better and you can see that with the Champions League final, where you had two English teams.

Brazil-born Deco joined Barcelona from Porto in 2004 after helping the Portuguese side win the Uefa Cup, Champions League and domestic league titles under former Chelsea boss Jose Mourinho. At Camp Nou, he won two league championships and was a member of the team that beat Arsenal in the Champions League final in 2006.

The deal may have an effect on Frank Lampard’s future at Stamford Bridge. The England midfielder has only a year to run on his contract and has been courted by Chelsea’s former manager, Jose Mourinho, who is now at Internazionale.

“It is great that we have so many great players here at Chelsea and it is great that there is the competition which is healthy for everybody and this just makes the team better,” Deco added.

“To have great players in any position of the club just enhances the club. I know it is a new challenge but I am looking forward to it.”

His signing is Chelsea’s second of the summer after international team-mate Jose Bosingwa.