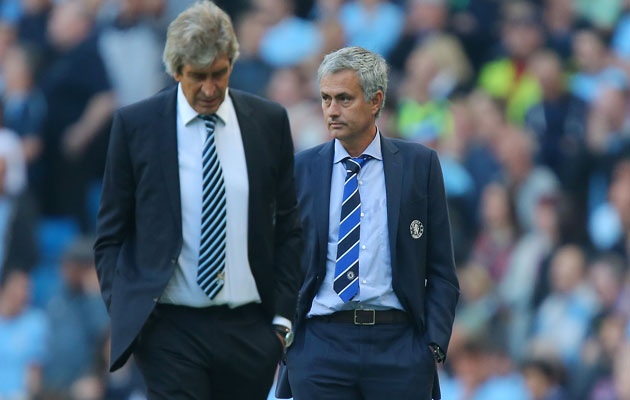 Manchester City manager Manuel Pellegrini has renewed his feud with Jose Mourinho, by describing Chelsea as a “small team” after Sunday’s 1-1 draw between the teams.

Andre Schurrle put Chelsea ahead before Frank Lampard levelled for a City side reduced to ten men for the last 20 minutes.

Pellegrini said: “I think we played 90 minutes against a small team trying to defend.

“I would not be happy to play that way. Ten players defended their own half, they scored a counter attack and they continued to defend until the end.”

Pellegrini compared Chelsea’s style to that of Stoke’s, who beat the Premier League champions 1-0 at the Etihad in August.

“I am happy because our team played in one way, we continued playing with 11 players, trying to score, and with one player less trying not to have another counter attack and concede a goal,” said Pellegrini.

“We continue with the same ambition, teams will find it hard to beat us. The team performance was very good.”

“I don’t want to analyse Chelsea. What the other teams do, it is not my duty to analyse.”

Responding to Pellegrini’s criticisms, Chelsea manager Jose Mourinho said: “Many times he says he doesn’t speak about me or my team but he continues to do so. Don’t ask me about these words.”

The rivalry between the two managers can be traced back to the time 3 years ago when Mourinho, then in charge of Real Madrid, mocked his predecessor’s tenure at Real.

“Second place is just the first loser,” said the Portuguese ahead of a match with Pellegrini’s Malaga.

“If Madrid were to fire me, I wouldn’t go to Malaga. I’d go to a top-level team in Italy or England.”

Asked why he had said he would not take such a job, he replied: “Because I wouldn’t. Because I’m in a situation where I can choose. Some people can’t choose.”