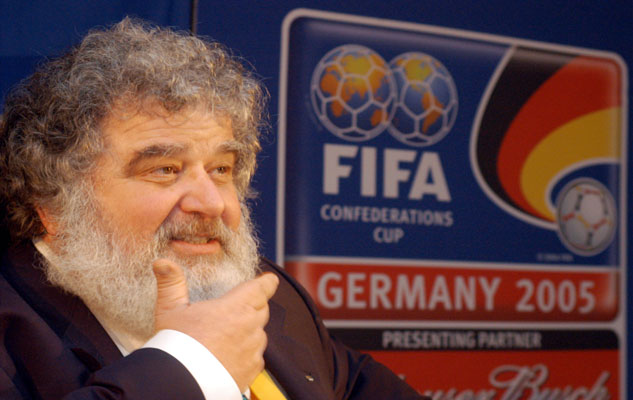 Chuck Blazer, the American football executive whose whistleblowing rebounded on him, was deeply mired in the receipt of bribes over host awards in the 1998 and 2010 World Cups.

Blazer, a pioneer of the game’s professional revolution in the United States, was general secretary of CONCACAF, the regional confederation for central and north America, for almost two decades. He was also a member of the executive committee of world federation FIFA between 1997 and 2013.

In that role Blazer co-operated closely with Jack Warner, the Trinidadian who was the then president of CONCACAF. Warner is indentified clearly, though not named, in the court papers relevant to Blazer’s convictions for racketeering, wire fraud, money laundering and tax evasion.

Blazer, who is seriously ill in New York, has hoped to mitigate his sentence  – which could involve many years in jail – by turning state’s evidence. His ‘assistance’, and that of Warner’s two sons, was central to the FBI cases built against the 14 people indicted last week.

Seven of them, including FIFA vice-presidents Jeffrey Webb and Eugenio Figueredo, were arrested in an early-day police raid at FIFA’s luxury Baur au Lac hotel in Zurich, two days before FIFA Congress. All are subject to extradition applications from the US Justice Department.

Notably, the court papers do not refer to FIFA president Sepp Blatter.

The timescale of Blazer’s corrupt activities began in 1992 when he and Warner travelled to Morocco, which was bidding for the 1998 World Cup.

According to Blazer he was present when a bribe of $1m was offered to Warner to vote for them (Blazer, at this point, was not a member of the FIFA exco). Warner apparently accepted the offer and later instructed Blazer to chase up, and secure, payment. Blazer organised receipt of the payment but France, of course, won the finals award.

Blazer’s evidence also revealed the extent of the bribery of CONCACAF’s three delegates on the FIFA exco when the 2010 World Cup was awarded to South Africa. This linked directly to last week’s indictment reference which has so angered the South African government.

Blazer saw it differently, according to the court papers.

In 2004, the FIFA exco was preparing to consider bids for the 2010 World Cup. Morocco offered Warner $1m again but Warner also knew by then that “repesentatives of FIFA, the South African government and the South African bid committee” were prepared to pay $10m “to support the African diaspora.”

Warner accepted the promise of the $10m but agreed to pay Blazer $1m. Blazer understood the money to be in return for the three CONCACAF delegates to vote for South Africa. The conspirators had to wait for their money. Even then Warner only ever paid Blazer $750,000.

This was not where it ended. For five CONCACAF Gold Cups Blazer accepted inducements from another co-conspirator, who can be identified as the Brazilian entrepreneur Jose Hawilla, to award media rights to US-based subsidiaries of the latter’s Traffic Group.

According to the court papers, company representatives “caused hundreds of thousands of dollars in bribe and kickback payments to be wired into accounts controlled by Blazer in multiple wire transfers.”

Hawilla and Traffic USA have also pleaded guilty to a string of charges arising out of the FBI investigation. Ironically the inquiry was triggered by revelations from Blazer following the cash-for-votes scandal in the 2011 FIFA presidential election campaign.

The revelations led to details emerging of Blazer’s own financial manoeuvrings. Hence he was targeted by the tax authority and FBI and ‘persuaded’ to turn state’s evidence