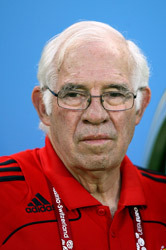 Luis Aragones says Spain have been inspired by their desire to confound the critics at Euro 2008.

The Spaniards easily beat Russia 3-0 on Thursday to reach their first Sunday’s final, where they will face Germany.

Coach Aragones said: “The criticism has taught me a lot, except when I was insulted. It has stimulated me and encouraged me to do things better.

“When we came to the tournament we realised we had a good team and we could get far.

“We had some hard moments but we have always believed in ourselves. We have a great team.”

Spain outplayed Russia in the second half in Vienna, although Aragones is aware that Germany represent a tougher challenge.

“We weren’t doing very well in the first half against Russia but in the second half we were able to play more freely and rediscover our game,” he stated.

“We are in the final and the adversary is Germany. It’s a hell of a task.”

With striker David Villa set to miss the final because of a thigh injury, Cesc Fabregas is expected to start the game.

“With Cesc we had another midfielder and it was difficult to control,” said Aragones.

“I know how well he can perform, he is a great player, like others in our squad.

“Cesc is 21, he and other players have acquired the experience that you might have of an older player.

Midfielder Fabregas added: “There are always doubts. Nobody was expecting us to be where we are now.”