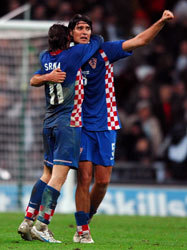 England failed to qualify for Euro 2008 after losing a thrilling game against Croatia at Wembley.

England went 2-0 down after 13 minutes when Scott Carson helped Nico Kranjcar’s shot into the net and then Ivica Olic slotted home a second.

Frank Lampard pulled one back from the penalty spot, before David Beckham crossed for Peter Crouch to level it. But Mladen Petric fired in a left-footed drive from 25 yards to end England’s hopes and possibly bring to an end Steve McClaren’s tenure in charge.

McClaren gambled by including the inexperienced Carson at the expense of Paul Robinson, but the Aston Villa keeper was directly at fault for the opening goal.

On eight minutes Kranjcar let fly with a speculative shot from 30 yards out that bounced just in front of Carson, but to the dismay of the majority of those present, the keeper could only parry the ball into the roof of the net.

Six minutes later England’s hopes suffered a further blow when Eduardo slipped a ball past the static defence into the path of Olic who sidestepped Carson before calmly rolling the ball into the empty net.

England introduced David Beckham and Jermain Defoe at half-time and the changes appeared to transform the game for McClaren’s side. Defoe earned a penalty after he was tugged back by Simunic, with the otherwise anonymous Frank Lampard slotting home the spot-kick.

Minutes later Beckham fed Crouch who controlled the ball on his chest before volleying home the equaliser an abject England scarcely merited.

Croatia continued to push forward in search of a winner and their efforts were rewarded 15 minutes from time when the substitute Petric fired home a long-range shot.

England conjured up one last chance when substitute Darren Bent’s shot on the turn just cleared the cross bar, but the expected onslaught did not materialise and Croatia held on comfortably for a deserved victory.