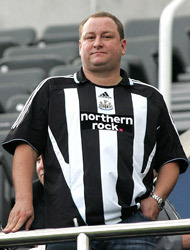 Newcastle United acting manager Joe Kinnear has claimed owner Mike Ashley is in talks with ‘at least eight consortiums’ over the sale of the club.

Ashley announced his intention to sell the club last month after he came in for strong criticism from the Tyneside faithful following the departure of Kevin Keegan.

Kinnear, who was apointed as interim manager last Friday, has dismissed suggestions that his stay could be a permanent one

Asked if his stay could be permanent, Kinnear said: “I don’t think so, to be honest, because I know for a fact Mike is talking to eight consortiums.

“I don’t know the outcome of those. I haven’t got a time-scale on it, so I don’t really know what the outcome is.

“But I know he is in talks with at least eight consortiums because he has told me that himself.

“I am contracted for eight games, but I assume that should due diligence and the deals go on a little bit longer, it may run into 10 or 12 games.”