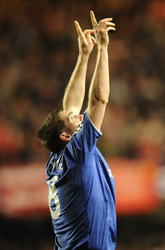 After a nervy night at Stamford Bridge Chelsea have beaten Liverpool in extra time and will now face Man Utd in the final. Click here for the latest outright betting!

Avram Grant last night paid tribute to Lampard, praising the remarkable “bravery” of the player, and also revealed his own emotion at guiding Chelsea to a first Champions League final on Holocaust Remembrance Day.

Grant lost members of his family in the Holocaust and on the final whistle knelt on the Stamford Bridge pitch and offered a prayer, before hailing Lampard, who converted a vital extra-time penalty just days after the death of his mother.

Lampard scored from the penalty spot in Chelsea’s 3-2 win that earned the club a place in the Champions League final for the first time in their history.

“He is a brave man, he is very close to his mother,” Grant said of Lampard. “It was not easy to take this decision with what happened to him in the last few days but he played well. I took the decision to play him after training on Tuesday.

“Frank was very, very close to his mother and what has happened to him over the last few days has not been easy. It was his decision to play and he played extremely well. We spoke about it yesterday and it was decided he should play then.”

Captain John Terry said: “Frank was fantastic, what a character to come in and train on Sunday and to block out what has been a terrible week for him and his family and those close to him. It has been very difficult for him, I am sure he will dedicate it to his mum.”

Victory represented vindication for Grant at the end of a season in which his managerial ability has come under scrutiny.

“To create history in this year after all the difficulties we have had we have stayed together,” said Grant.

“This is a good time to say a good word about everyone at the club. It means a lot to me, not just that we got there, but the way we did it. Liverpool are a very good team.”

“It means a lot to me,” he said. “I owe a lot to my parents. My mother came from Iraq, my father survived the Holocaust. He is the most optimistic and strong man I know. He buried his father, his mother, his sister with his own hands. It’s not an easy day for me.”

Didier Drogba admitted he was motivated by Rafael Benitez’s pre-match criticism of his playing style and he slid straight in front of the Liverpool coach as he celebrated his first goal.

“It is very personal what he did,” said Drogba. “That is not good. Football is not about criticism. You can speak to the players, talk to them directly, and not do it in the papers. It’s hard for me take. It’s not good for my image. I’m giving my best to put the team at the top, it is not good – it is not fair, but it is finished.”

After a nervy night at Stamford Bridge Chelsea have beaten Liverpool in extra time and will now face Man Utd in the final. Click here for the latest outright betting!