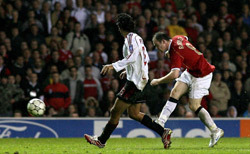 Manchester United manager Sir Alex Ferguson believes the speed of his side’s attack will be enough to take them through to the Champions League final in Athens.

United came from behind to beat Milan 3-2 in the first leg of their semi-final at Old Trafford on Tuesday.

“We proved we have the qualities to win this tournament.

“With the speed of our team we will score again over there. I don’t know whether it will be enough for us but it will be a fantastic match.”

An absorbing encounter at Old Trafford saw Cristiano Ronaldo’s header put United in front before Kaka hit back with two sublime goals for Milan. Wayne Rooney levelled the scores early in teh second half before scoring the winner in the final minte of stoppage time.

“When you are 2-1 down to a team of Milan’s standard it is very difficult to get back into the game,” Ferguson added.

“But at half-time we told the players to persevere with playing our football and keep playing at speed.”

Ferguson acknowledges that his side face a testing time in Milan in a week’s time, but believes that the narrow advantage they hold will be enough to earn a place in the final.

“It was a fantastic pass by Paul Scholes to set up Wayne for our second goal and that gave us the incentive,” Ferguson explained.

“We needed our players to hit the heights and his winner was a fantastic goal.

“The way we played – with the ball as wide as we could to stretch them – meant he was not getting as much of the ball as he would like but when he did he was a real threat to them.

Rooney paid tribute to Paul Scholes in setting up the first of his two goals.

He said: “I see him do it every day in training. He’s brilliant. He is a joy to play with, a genius.

“It’s a great feeling. It was a difficult match but when it got late we kept going. We knew the victory would make it a little bit easier for the away leg.

“And to get a goal in the last minute is a great feeling.

“It was fantastic. At 2-1 behind at half-time against a very good Milan team, we knew it would be difficult to get the win. The manager told us to keep pushing, keep going and we’ll get the goals, and we did.”