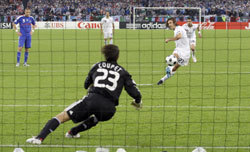 Italy are through to the quarter-finals of Euro 2008 after their 2-0 victory over France, combined with Romania’s defeat to Holland, ensured the World Cup winners finished runners up to the Dutch in Group C.

France will feel mildly aggrieved at the nature of their defeat in a match in which nothing went right for them, but in truth, this is a side well past their sell-by-date and they can have few complaints about finishing at the foot of the group.

Domenech made several changes from the side that had been thrashed 4-1 by Holland. In came Karim Benzema to offer support to Henry up front, while Eric Abidal replaced Lilian Thuram and Francois Clerc was drafted in for Willy Sagnol.

For Italy, Roberto Donadoni brought in Antonio Cassano in place of Alessandro del Piero, while Gennaro Gattuso was recalled for the dropped Mauro Camoranesi.

The new look French defence looked ill at ease from the outset and they could have fallen behind within the first five minutes when Toni took advantage of a mistake by Abidal, but with just Gregory Coupet to beat screwed his shot wide of the target. It was one of a number of easy chances squandered by the wasteful striker over the course of the game.

France suffered a huge blow after just eight minutes when Franck Ribery, their most creative player, was stretchered off with what looked a serious injury. Domenech introduced Samir Nasri, but without the energetic prompting of Ribery, France’s prospects had suddenly nosedived.

Things were about to get much worse for France when Abidal brought Toni down in the area; the referee, Lubos Michel, pointed to the spot and as Abidal was the last defender, he was compelled to send off the Barcelona defender. Pirlo slammed home the resulting penalty and France were left with a mountain to climb.

The unfortunate Nasri, who had only been on the pitch for 16 minutes, was sacrificed as Domenech shored his depeleted defence by introducing Jean-Alain Boumsong.

Toni, who has yet to score in the competition, continued his disappointing run in front of goal by squandering three straightforward chances. Had the Bayern Munich striker not left his shooting boots behind in Germany, Italy would have been out of sight by half-time.

France enjoyed a rare piece of luck just before the interval when Coupet tipped Fabio Grosso’s free-kick on to the post, but at this stage it seemed a case of when, not if, Italy would extend their lead.

France, began the second half on the front foot, but with Italy defending in numbers they struggled to create any clear openings. Perhaps the best chance fell to Benzema, but the Lyon striker crashed a dipping volley just wide of the post.

On the hour mark, the French mini-revival was soon snuffed out when Italy extended their lead in somewhat fortuitous circumstances. A free-kck was awarded to the World Cup holders and the ball was teed up for Daniele de Rossi whose long-range effort took a deflection off off France skipper Thierry Henry to wrongfoot Gregory Coupet.

There was no way back for France. Try as they might, the physical effort of competing for over an hour with ten men had taken its toll and although they kept the scoreline respectable, the prospect of a comeback always looked exceedingly unlikely.

With news filtering through from Berne of a second Holland game in their encounter with Romania, the Italian fans could finally celebrate and look forward to a clash with Spain in the quarter-finals.

For France’s old guard, including the likes of of Claude Makelele, Lillian Thuram, Willy Sagnol, Patrick Vieira and possibly Thierry Henry, it was a disappointing end to their international careers. For Raymond Domenech, the defeat may well mark the end of his four-year tenure as France coach.