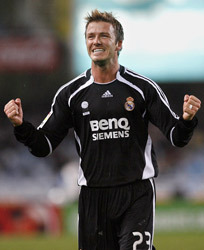 Los Angeles Galaxy claim to have already recouped the money they spent on David Beckham, according to their owners.

Beckham signed for Galaxy in January, although he does not actually join the MLS outfit until July – once his commitments with current club Real Madrid have ended.

However, endorsements and sponsorship deals done on the back of Beckham’s arrival – mean his £10million five-year deal is already covered.

An additional 7,000 season tickets have been sold and a new multi-million sponsorship deal is now in place.

“We were never worried about our financial commitment,” said Tim Leiweke, chief executive officer of the Anschutz Entertainment Group, the company who own Galaxy.

“We’ve already made our money back,” he confirmed.