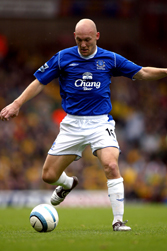 Everton’s Thomas Gravesen is expected to complete a £2.3m move to Real Madrid after undergoing a medical on Friday.

Everton, who have tried to retain the services of the Danish international, are now resigned to losing the midfielder.

Gravesen, 28, is out of contract in the summer and would be entitled to leave Everton on a free transfer at the end of the season.

Agent John Sivabaek told BBC Sport: “I have had a phone call saying everything has been agreed. I expect Thomas to take his medical with Real on Friday.”

But an Everton spokesman said: “Talks are currently ongoing between the clubs and no deal has been agreed as yet.”

Sivebaek is convinced Gravesen will be moving to Spain: “No papers have been signed yet, but it looks like everything has been agreed and Thomas is very excited about it.

“He is also sad because he has had five fantastic years at Everton.”

“Thomas was very happy at Everton, but when Real Madrid want to sign you, you cannot say no.”

Real refused to confirm a deal had been, saying on their website: “Real Madrid and Everton will renew telephone conversations on Friday morning.

“The talks, that began yesterday, will focus on trying tosolve the existing economic differences.

“The player has expressed his desire to join Real Madrid and is waiting for anagreement between the two clubs.”

Gravesen joined Everton from Bundesliga side Hamburg for £2.5m in 2000.