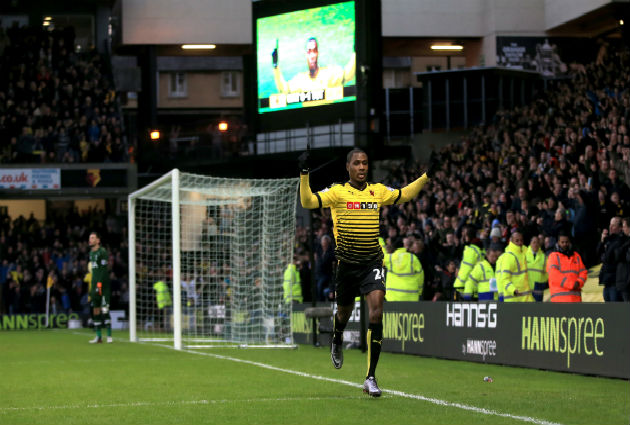 Watford striker Odion Ighalo has revealed that should Manchester Utd come calling, he would find it difficult to turn down, and said that playing at Old Trafford would be a “dream”.

Ighalo has arguably been the surprise package this Premier League campaign – alongside Leicester duo Riyad Mahrez and Jamie Vardy – and has been in wonderful form hitting fourteen league goals offering the Hornets power and movement upfront.

Ighalo’s style of play is reminiscent of Manchester Utd legends Dwight Yorke and Andy Cole, and Igalo admitted to The Sun that he idolised both strikers growing up, as well as adoring watching Manchester Utd.

He said: “They were my team growing up. I loved watching Andy Cole and Dwight Yorke on TV.

“They were my idols and playing at Old Trafford has always been a dream.”

Ighalo’s stock is fast rise; and has been at the heart of speculation – with interest from top clubs in Spain and Italy being mooted.

However the man himself has admitted that applying his trade in England has always been his priority.

“There has been speculation from Spain and Italy but I’ve played there and now want to play in England,” Ighalo said.

The Watford frontman did acknowledge that it was unlikely that he would be leaving Watford, before adding that he would find it impossible to turn down a move to Old Trafford.

“I don’t think I will be moving but I’m not sure I’d say no if United called.”

However in an interview with talkSPORT’s Ian Abrahams, fellow Watford striker Troy Deeney has said that neither he or Ighalo would be leaving this month.