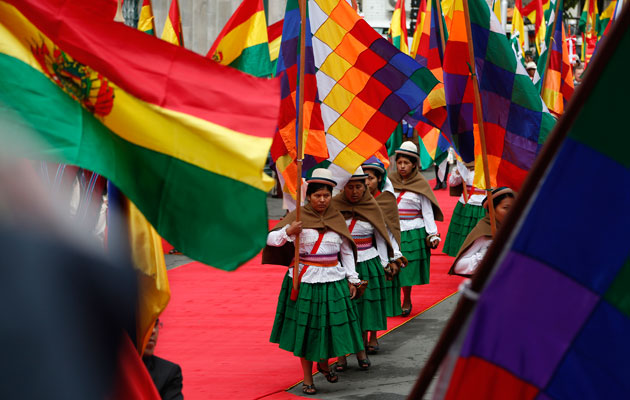 A UK-based graphic designer has received “torrents of abuse” online after he created a new design for the Bolivia national football kit.

After visiting the country earlier this year, Angelo Trofa, who works in fashion but admits he has dreamed of being a football kit designer, posted sketches of a new Bolivian kit on his Facebook page, with the away shirt inspired by the rainbow-coloured Whiphala flag.

The flag represents the indigenous Andean population and was promoted to the status of national flag in 2009 – equal to the official Bolivian flag of red, yellow and green.

Bolivia Away Kit Concept: Inspired by the Wiphala. pic.twitter.com/Ew5NSTXNu1

However, not everyone was happy with his design, with the non-indigenous population accusing the 26-year-old designer of disrespecting the traditional Bolivian tricolour.

On Facebook, Juan Ignacio Abella said the eastern part of Bolivia “has no connection with this rainbow flag …. only red, yellow and green flag represents me”.

Omar Ruiz said he should have “more respect for a country and its traditions”.

Trofa told the BBC that he expected a reaction to his design, but had not anticipated quite such a backlash

“But the non-indigenous population disregard it and don’t associate themselves with it,” he told the BBC.

“So I expected a bit [of abuse] but it snowballed and got a bit silly.

“I received torrents of abuse – mainly from angry Bolivian men – people saying they would kill me if I went back and that I was designing for the Nazis. The reaction was ridiculous.”

But Amaru Villanueva, a director at the centre for social research of the Bolivian Vice Presidency, and a rare voice of Bolivian sanity on the subject of the kit, said it was a “storm in a teacup” and there was no suggestion that the shirt design would be taken up.

“Social media tends to amplify extreme opinions,” he said. “Bolivia is such a diverse, multi-ethnic state that no matter what emblem you use, some people will feel left out.”

To the bemusement of Trofa the controversy over his design has gone viral, with numerous news organisations picking up on the story.You can follow his reaction to it all on his official Twitter page.