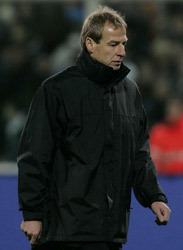 The defending Bundesliga champions fell to their biggest defeat in seven years against the new league leaders and once again missed the chance to rise to the summit for the first time all season.

“This defeat hurts, also in view of the game in Barcelona,” admitted Klinsmann. “To fly back to Munich on the back of a result like this is anything but comfortable.

“We have got to look forwards and move up a gear as quickly as possible,” he said.

“Of course we will discuss the errors we have made, but we will be focusing our attention on Barcelona.

“We are all professionals and part of that means we must lift ourselves, even after a hammering.

“We will get up again and play a good game in Barcelona.”

A decent result at Camp Nou would also enable them to rediscover self-confidence ahead of next weekend’s Bundesliga encounter with Frankfurt.

“All is not lost,” added Klinsmann. “There are still enough games to play, but certainly the atmosphere is anything but good. We have got to digest this.”