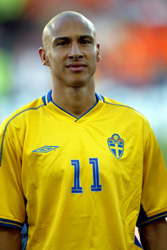 Don’t miss our key betting facts, tips and odds for the Saturday 3pm Premiership games here, with leaders Chelsea among those in action.

Striker Henrik Larsson said an emotional farewell to football and admitted his decision to retire had left an “emptiness”.

The Swede took to the pitch for the last time in Helsingborg’s 2-0 Swedish League defeat to Djurgarden on Wednesday.

The 38-year-old scored over 300 goals during spells with Helsingborg, Feyenoord, Celtic, Barcelona and Manchester United.

Tributes from the likes of Sweden coach Lars Lagerback, United boss Sir Alex Ferguson and international team-mate were played at the ground.

“It really hits you when meet all this love,” said Larsson, who will not play in Helsingborg’s final match of the domestic season at Elfsborg on Sunday.

“I’m normally quite a cool character but right now I feel like I could cry.

“It’s huge to be able to end it on our home ground and it has to end some time. It’s rubbish to end things this way (with a defeat) but you can’t have everything in life.”

Larsson, who won 106 caps for Sweden, was also moved by Helsingborg’s decision to retire the number 17 shirt in his honour.

“It’s a fantastic gesture by the club, to retire it for ever. I’m very moved,” he said.

Larsson will now take time out to think over what to do now, although he has already been linked with several coaching jobs, including at Celtic.

“I don’t know if I have to go down to the employment agency and do certain things, but I have the luck and luxury to be able to say no to jobs which are offered to me,” he added.

“But obviously there is an emptiness at present, and I need to fill that emptiness with something.

“I’m fortunate enough to have earned enough money to be able to sit back and not panic, but I have to do something. I can’t just glide through the rest of life.”

Don’t miss our key betting facts, tips and odds for the Saturday 3pm Premiership games here, with leaders Chelsea among those in action.