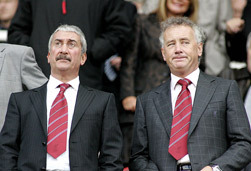 Liverpool have decided not to formally accept the £156m takeover bid from Dubai International Capital (DIC).

The Anfield board met before Tuesday’s Premiership game with West Ham and while it is yet to receive a formal bid from Dubai International Capital, it is understood to have opted to seek more time to study a rival approach from the US businessman George Gillett, owner of Montreal Canadiens ice hockey team.

DIC remains the chairman David Moores’ favoured bidder but other shareholders want to consider a bid which would value shares at nearer £5,000 compared to DIC’s £4,500.

A final decision is expected to be made by the end of the week.

DIC has completed due diligence and wants to make its formal bid, via the Stock Exchange, for Liverpool chairman and owner David Moores’ 51.6% majority shareholding next week.

Gillett’s original offer had been rejected before Christmas, but last week he submitted a new offer by letter to Moores which increased his bid to give Moores £88m for his holding.

Gillett has been trying convince the Liverpool board that he will underwrite the £215m cost of moving from Anfield to a new 60,000-seat stadium at Stanley Park. There were fears among some board members that Gillett intended to revive plans for a ground share with Merseyside rivals Everton.

With the funding for the first phase of the new stadium needed in the next few weeks, Liverpool know they are running out of time, and they are keen to make a decision by the end of this week.