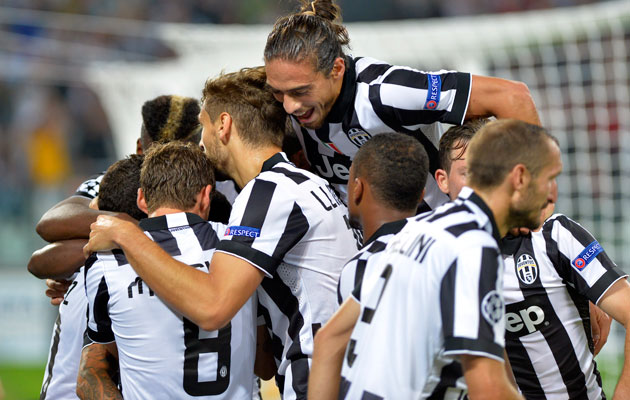 Juventus 2-0 Malmo
Carlos Tevez and Juventus had an enjoyable second half after struggling to make inroads in the first.

Tevez ended a 14-match goal drought in the Champions League. The Argentine combined well with Asamoah, playing a quick ball, which the Ghanaian back-heeled back to Tevez, who produced a smooth first-touch finish. Tevez was brought down in the 89th minute just outside the box, and managed to curl the free kick in with ease.
Tevez 1st Goal (1-0) – https://www.youtube.com/watch?v=hQKgBoX0Daw
Tevez 2nd Goal (2-0)- https://www.youtube.com/watch?v=CoebU9670as

The hosts were 2-0 up thanks to a nice goal from Masuaku plus one from Dutch forward Afellay. Mandzukic reduced the arrears before half time through a header, but Olympiakos regained a two goal lead with less than twenty minutes left through Mitroglou. Although Griezmann brought Atletico within a goal in the 86th minutes, it was a case of too little too late for last season’s runners-up.

Liverpool 2-1 Ludogorets
Liverpool struggled at home in their return to the Champions League, but were saved in the 90th minute by a Steven Gerrard penalty.

Liverpool had left it goalless till late, until Mario Balotelli scored his 1st goal for the club. The visitors looked to have secured a point when they equalised in the 90th minute, but Luodgorets goalkeeper brought Manquillo down in the box in added time, and Gerrard calmly slotted away the resulting spot-kick.

Real Madrid 5-1 FC Basel
Bale, Ronaldo and Rodriguez scored within six minutes to end the game before the first half had even ended.

The scoring began with a Basel own goal in the early days of the game, and 3 of the 5 most expensive players ever added to it to make it 4-0 by the 36th minute. Gonzalez of FC Basel brought one back two minutes later, but it was nothing more than a consolation goal.

Benzema finished off the scoring ten minutes towards the end to finish a domination in Madrid. The holders now top their group on goal difference.

Hulk started off the scoring just 5 minutes in with a perfect finish from a clever through ball.

Benfica goalkeeper Artur was red-carded only 18 minutes into the game, after rushing out and bringing down Danny of Portugal. Paulo Lopes was brought on for an oufield player, but could do nothing as Axel Witsel, former Benfica player, produced a powerful header which he could only reach after it had gone past the line.

With just 4 shots to Leverkusen’s 13, and their goal being their only one on target, Leverkusen must have been very frustrated to leave France with a defeat in their first group stage game.

Joao Moutinho of Portugal was the only goal-scorer of the game in the 61st minute, when a through ball was headed into his path, and the defender could do nothing about his shot but deflect it past the goalkeeper.

Dortmund 2-0 Arsenal
Arsenal managed only 4 shots, with 1 on target in Germany as they struggled against the strong Bundesliga side.

Immobile showed great skill and strength just before half-tine to get past Laurent Koscielny and find the net. Aubameyang scored and hit the crossbar as well.

Galatasaray 1-1 Anderlecht
Galatasaray struggled against Belgian League champions Anderlecht at home, conceding soon after half time to a great goal by Praet.

Galatasaray waited till very late to level, equalising in added time when centre-back Chedjou showed great pace and technique in the Anderlecht box, getting past a defender and slotting it across goal to Yilmaz who smashed it past the defenders and into the goal.

Bayern 1-0 Man City
Jerome Boateng’s 90th minute goal was the decider of this intense game which featured a number of close efforts and some great goalkeeping from Joe Hart.

Thomas Muller scored inside the 1st minute with great team build-up but it was ruled offside. In added time, with a goalless draw looking inevitable, Jerome Boateng struck a great shot from the edge of the box, the half volley proving too much for the England No.1 Hart.

A thrilling game, but the home side deserved the win based on the balance of play.
Boateng Goal (1-0)

Roma 5-1 CSKA Moscow
Roma strolled through their 1st Champions League group stage game, thrashing CSKA at home. They began the game with two goals in the 1st 10 minutes, from Iturbe and Gervinho. Maicon in the 20th minute produced a teasing cross which Moscow goalkeeper Akinfeev could only palm into his own net.

Gervinho made good use of his dribbling skills to get past a defender inside the box and put the ball past the keeper. Another cross fired in from the Italian side led to a second own goal, and in the 82nd minute Musa brought one back for the Russian side to make the score 5-1.

Ajax 1-1 PSG
Zlatan Ibrahimovic failed to score against his former club in Amsterdam as the sides drew 1-1.

Ibra’s best effort came on 14 minutes but his shot was blocked by a defender, but it fell straight to Edison Cavani who slotted home.

In the 74th minute Ajax’s Lasse Schone produced a wonderful free kick that Sirigu could do nothing to stop.
Schone Goal (1-1) – https://www.youtube.com/watch?v=WQu2wV7_V98

Barcelona 1-0 APOEL
The Catalan club edged past Apoel for a winning start in Group F, with the one goal a header from Gerard Pique – from a Lionel Messi free-kick – almost half an hour into the game.

It was a frustrating night for the hosts, helped by Apoel goalkeeper Urko Pardo, who denied Messi twice from goalscoring opportunities. In the dying seconds of added time, debutant goalkeeper Marc-Andre Ter Stegen was forced to deny Apoel an unlikely equaliser with an impressive save.

Chelsea 1-1 FC Schalke
Chelsea begun the game well when Eden Hazard set-up Cesc Fabregas with a clever pass. It was Fabregas’ 1st goal for Chelsea, although he pas picked up 7 assists so far in their 4 previous games.

But Dutch striker Klaas-Jan Huntelaar was there to spoil the party for Chelsea, drawing Schalke level in the 62nd minute with a tidy finish.

Maribor 1-1 Sporting
A late Nani goal – his first since joining on loan from Man United in the summer – had all but decided the game, but Sporting had been sold dreams as Zahovic equalised for NK Maribor with a header over the keeper in added time after a mistake in the Portuguese side’s defence.
Nani Goal (1-0) – https://www.youtube.com/watch?v=jNu6lm2AnCw

Ath Bilbao 0-0 Shakhtar
Shakhtar Donetsk produced a battling display in Spain, holding Athletic Bilbao to a goal-less draw – much to the frustration of the home side.

FC Porto 6-0 BATE
Yacine Brahimi helped his side to a thrilling home victory, netting a fantastic hat-trick, with some incredible runs and a well-taken free kick.

Jackson Martinez also scored a header in the 37th minute, Adrian Lopez scored in the 61st minute, and Aboubakar scored in the 76th. It was an unstoppable performance by the Portuguese side.