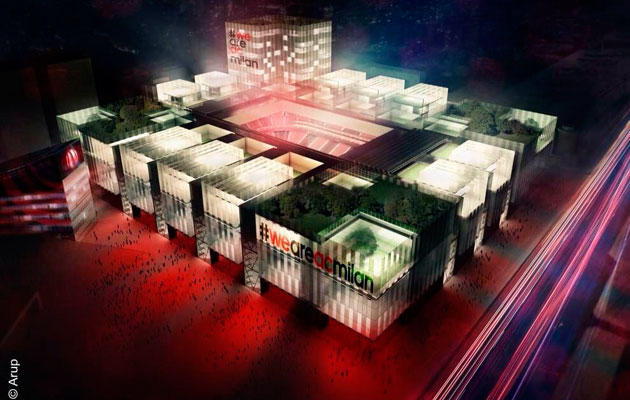 Milan have produced plans for a new 48,000-seat stadium which they hope to build in time for the start of the 2018-19 season.

The project, which is estimated to cost between €300m and €350m, would involve the club leaving the city-run 80,000-seat San Siro its longstanding home, which it shares with city rivals Inter. Unlike the council owned San Siro, the new ground will be run by the club.

The official video of the scale model of the new #ACMilan stadium in the Portello – Fiera Milano City area.https://t.co/7kRbflkVdV

The architect, Emilio Faroldi, told Gazzetta dello Sport: “We were inspired by the Emirates Stadium in London and the stadiums of Basel, Bilbao and Neuchatel.

“We approached the project developing the basic themes of this work: we are talking about environmental sustainability, the concept of a smart urban arena that is easily reached by public transport, and it is low impact. A stadium, also, that identifies itself more like a building, like a piece of the city, and not as a business machine to be activated exclusively for a sporting event once a week.

“Scientific research, through a series of studies, tells us clearly that the role of the arenas in Europe and in the world is gradually changing. The stadiums are no longer meant only as a place for sporting events, although open all week, but as a useful piece to reorder the urban outlook of a city, a neighbourhood.”