Neymar’s contract has been leaked to the press — and the Barcelona star reportedly earns ‘just’ £77,000-a-week.

Football Leaks, the organisation behind a number of high profile disclosures in recent years, have published the 13-page document signed by the Brazilian in 2013 when he joined Barca. 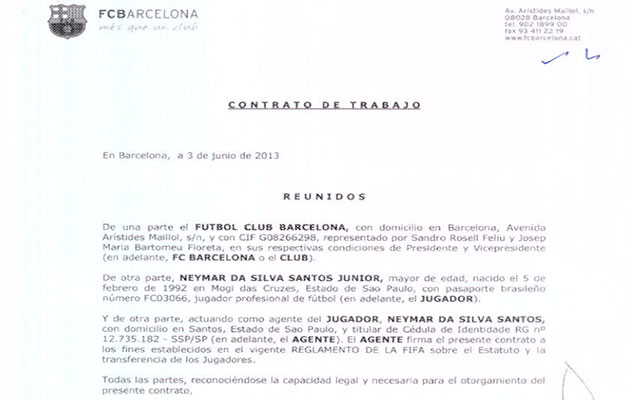 Neymar, who came third in last year’s Fifa Ballon d’Or award, earns €5million-a-year — just over £4m. In contrast, Wayne Rooney, the highest paid player in England, but one who has never made the podium at the annual award for the world’s best footballer, reportedly earns £13.5m-a-year. Indeed, Neymar would not even come close to being among the top ten earners in the Premier League – a list which sees Chelsea captain John Terry come in at 10th spot on £8million a year.

The Brazilian’s contract is signed by Barcelona president Josep Maria Bartomeu and former predecessor Sandro Rosell. Neymar and his father, acting as agent, were co-signatories. 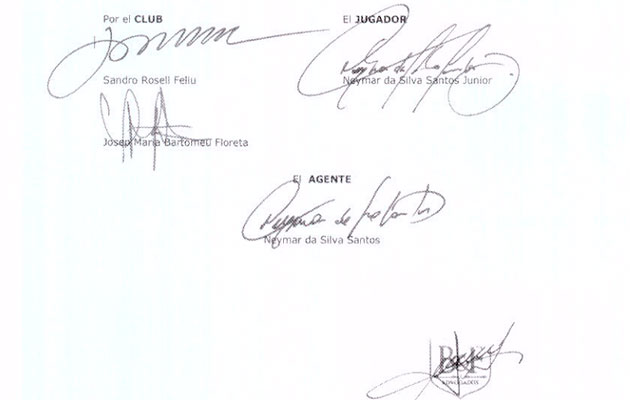 The former Santos forward received a £6.8m signing bonus and agreed a deal which runs until June 2018.

The contract, which includes a number of bonuses< states Neymar will earn at least £39.7m over the five years.

The bonus clauses include:

1. If Neymar plays 60 per cent of matches Barcelona are obliged to pay him £857k.

2. Each time Barcelona qualify for the Champions League, the Brazilian earns £514k.

3. Every time the Catalan club qualifies from the group stage, Neymar will receive £343k.

4. Neymar has set a series of bonuses for each title Barcelona win. La Liga represents a premium of £514k; the Champions League: £685k and the Copa del Rey: £685k.

If Barca win the Champions League and Copa del Rey, the premium rises to £857k and if they complete the treble Neymar would collect £1.37m. So, last year’s treble was quite lucrative for the forward.

A number of clubs are reported to be interested in signing the Brazilian this summer. While many of them could certainly afford to boost his current salary, most would baulk at paying his buyout clause which stands at an eye-watering £153m.