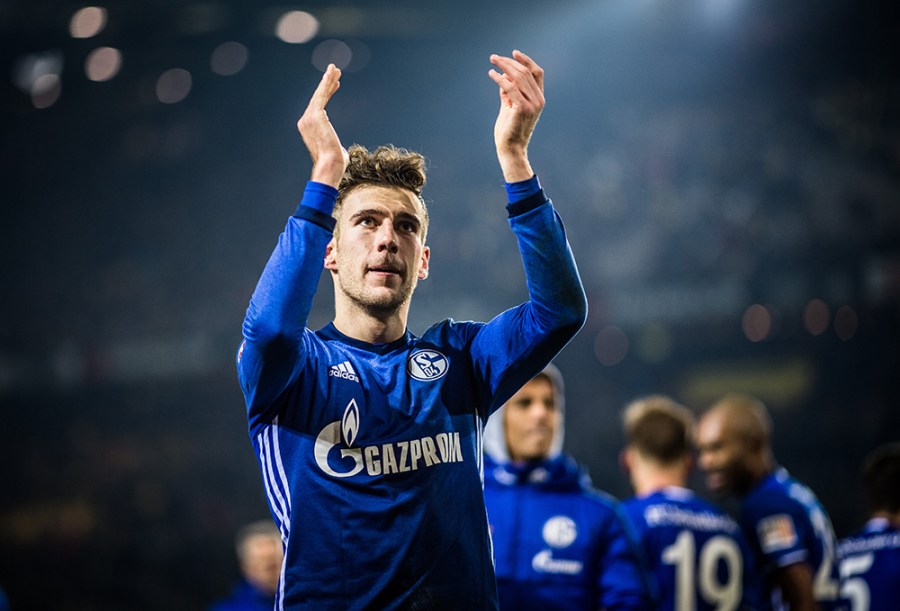 It’s official. Next season, Schalke and Germany golden boy midfielder Leon Goretzka, will be sporting the red-and-white of Bayern Munich, electing to join the Bavarian high rollers on a Bosman free.

Over the past few months, the 22-year-old had been linked with many of Europe’s most prestigious clubs, notably Barcelona, Real Madrid, Juventus and Liverpool. Yet in the end, simply could not resist the gravitational pull of the Allianz-Arena.

No one would have been surprised by Goretzka’s decision; the move represents a marked career upgrade. However try telling Schalke it’s just a matter of self-betterment.

In the eyes of a large proportion of Schalke fans, their once-adored vice-captain has let the club down, guilty of bad faith in contract renewal talks and depriving the club of a substantial fee.

Schalke claim Goretzka effectively agreed to a new deal last summer, but that on returning from Germany’s triumphant Confederations Cup campaign, asked for – and was granted – more time to reflect on his options.

Once described by a former coach (Bochum’s Peter Neururer) as a “once in a century talent”, Goretzka apparently argued that he wanted to see how Schalke would shape up this season. But even with Schalke  going into the Bundesliga winter break in an excellent second-place, still thought it best to terminate his five-year association with the Royal Blues.

“Only Leon can give the reasons for his change of mind,” sighed Schalke director of sport Christian Heidel.

As Goretzka knows only too well, the next few months are likely to be very stormy indeed. “I know that I am disappointing all of you and that you will have little understanding of it,” said Goretzka in a message  on his Facebook page. “Whatever statement I make now is not going to strike a favourable chord.

“I do not want to say goodbye now as a half-season remains. Anyone with even the slightest knowledge of me knows that I will continue to give my all. I want to help Schalke return to the Champions League and win the DFB Cup. You don’t have to agree with my decision, but don’t make it hard for us. We have targets we want to achieve and I aim to make a decisive contribution.”

While the soon-to-depart headliner hopes to dampen down the fire, others in Gelsenkirchen clearly are not in the reconciliation business. In his first pre-breakaway match for Schalke – a 1-1 home draw with Hannover – he was roundly booed and club chairman Clement Tonnies also has gone in with a two-footed challenge, declaring that if he had his way, Leon would sit in the stands for the rest of the campaign.

Such is the price you have to pay, when, like Goretzka, you say yes to the biggest club in the country. Ambition? Outrageous.

1. Hamburg, we have a problem.

Very much in panic mode after four straight defeats and six games without a win, struggling Hamburg have called time on the the 18-month reign of coach Markus Gisdol. The final nail in Gisdol’s coffin was Saturday’s 2-0 home defeat to bottom club Köln and now the technical area baton has passed to Bernd Hollerbach, previously the boss of lower league outfit Würzburg Kickers. A former long-serving midfielder at HSV, Hollerbach was for many years, the trusted right-hand man of ex-Schalke and Wolfsburg ‘Trainer’ Felix Magath.

“He [Hollerbach] absolutely is the right man to lead Hamburg out of this situation,” says Magath, an outstanding number ten for HSV in the 1970s and 80s. “I’m convinced they will not be involved in any relegation battle.”

Hoffenheim’s German international midfielder Kerem Demirbay is in something of a moral maze at the moment.

Should the 24-year-old left-footer stay true to Hoffenheim, where he has been playing the best football of his career. Or quit Sinsheim at the end of the season for Dortmund or Schalke ? As a schoolboy and junior, he was on the books of both of the Ruhr giants, though does have a stronger, deeper allegiance to Schalke. The cultured Demirbay will cost around 20 million euros.