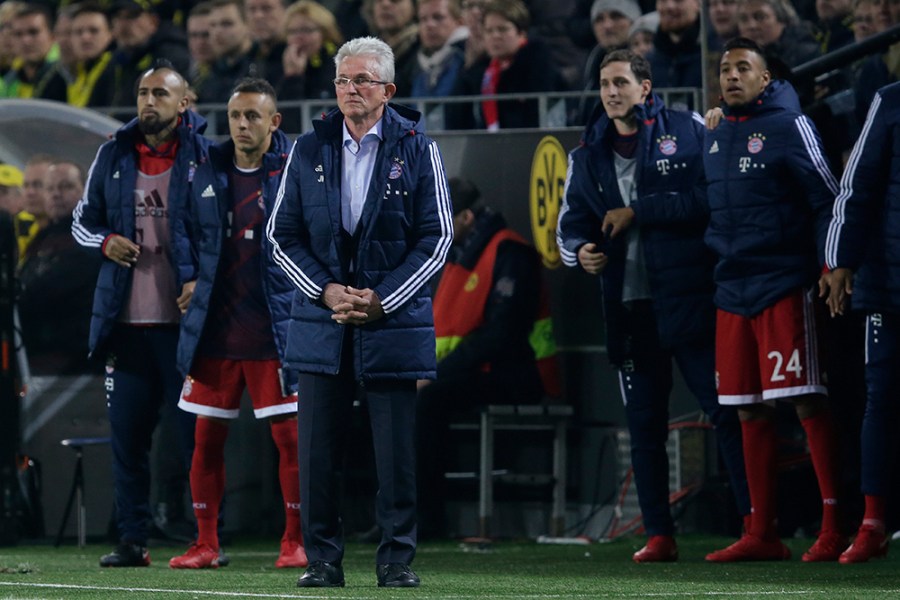 Just as the Bayern Munich board hoped, the return of iconic coach Jupp Heynckes has sparked an immediate and substantial shareholder dividend: seven wins in his first seven competitive games and confidence and unity promptly restored.

After a sloppy, disjointed start to the Bundesliga season, Bayern are once in more cruise control, wresting back  pole position thanks to victories over would-be challengers RB Leipzig and Dortmund. Not so long ago, the Bavarians trailed leaders Dortmund by five points. Now the tables have turned.

In terms of mood and ethos, a great deal has changed at the Allianz-Arena since the 72-year-old Heynckes took over from the deposed Carlo Ancelotti in early October. Stony-faces on the practice field, have been replaced with laughter and camaraderie; all of a sudden, the pupils have an apple for teacher; while training has become far more intensive.

Heynckes, now in his fourth spell at the club, always has put a premium on injury-prevention and impeccable conditioning and clearly of the opinion that his predecessor was lax in this area, has wasted no time laying down a new set of ‘housekeeping’ rules.

For instance, the amount of time devoted to warm-ups before training has gone from a three or four minutes to a good quarter-of-an-hour and according to one local beat reporter, the players are expending more energy in those exercises than in an entire Ancelotti work-out

“The way you play reflects the way you train,” says Heynckes. The net-result ? Greater levels of matchday dynamism and verve.

Another vital element in the Bayern revival is their rediscovered defensive stability – conceding only twice in their last seven outings. Their pressing game is sharper and more co-ordinated. From bow to stern, everyone is putting in a double-shift. And the back-four have cut out the unforced errors, the tendency to occasionally switch off.

Much of the credit for the German champions’ improved solidity must belong to outstanding defensive midfielder Javi Martinez. The 29-year-old Basque frequently would be used  by Ancelotti and Pep Guardiola at centre-back, but Heynckes prefers him plugging the holes in front of the back-line and on the evidence of the last few weeks, who could argue.

Strong, athletic and mobile – as well as comfortable on the ball – Martinez very much is Heynckes’ insurance policy. Under Ancelotti, any loss of possession often would lead to boulevards opening up in the middle of the park. That no longer is the case. The barricades are manned.

“Javi is really important to us,”  declared Bayern keeper Sven Ulreich, who this term has been standing in for the injured Manuel Neuer. “He’s one of the reasons why we we’re allowing fewer chances.”

Hoffenheim, bankrolled by software tycoon, Dietmar Hopp, are pushing for action be taken to stop opposition fans aiming abuse at their benefactor. Supposedly guilty of being the power behind the throne at a ‘plastic’ club, Hopp has been a hate figure on German terraces for several years and was recently was targeted by supporters of Gladbach and Köln. Hopp’s lawyer, Christoph Schickhardt, is touting a nuclear response to the anti-Hopp chants and banners: “Those clubs who don’t have their fans under control, aren’t capable of putting on a Bundesliga game. The match shouldn’t kick off and the points forfeited.

Germany goalkeeping coach Andreas Köpke has told Paris Saint-Germain custodian Kevin Trapp that he will have to move in January if he wants to remain in the Nationalmannschaft squad. Trapp has not started a single competitive game for PSG this season, relegated to the back-up spot by the good form of Alphonse Areola. “The player himself has to make the decision to seek a transfer or not,” Kopke told Kicker magazine. “But if he doesn’t have the game time, it will be difficult for him to be picked.”