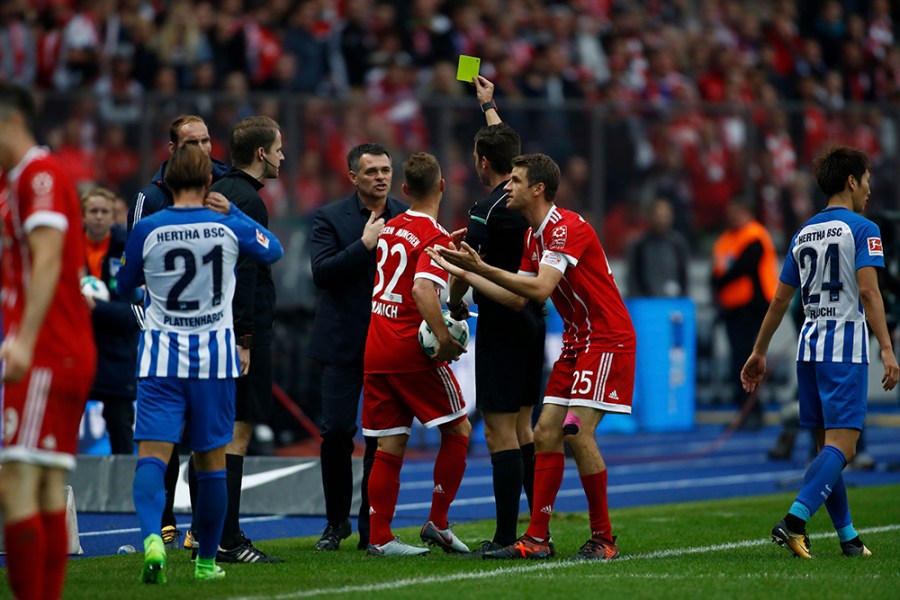 If the Bayern Munich board thought the sacking of coach Carlo Ancelotti would be an instant cure-all for their early season woes, they were to be sorely disappointed.
With Ancelotti’s assistant Willy Sagnol taking over in the technical area for the Bundesliga trip to Hertha Berlin, the German champions were just as unconvincing as they were with ‘Carletto’ at the helm, slip-sliding to a 2-2 draw after going two-up on 49 minutes.
In an obvious attempt to distance himself from the previous regime – as well as a tacit nod to player power – Sagnol’s first act as boss was to recall the four senators (Franck Ribery, Arjen Robben, Mats Hummels and Jerome Boateng) controversially dropped by Ancelotti for the humiliating 3-0 Champions League loss at Paris Saint-Germain. But even with the big-names back on board, Bayern still could not make their extra class count.
The harsh truth is that Bayern are a pale shadow of their former dominant selves. They are inhibited and hesitant; they lack vim, focus and togetherness, have acute defensive frailties and are decidedly short of tempo and ideas in the attacking third. An extraordinary state of affairs for a club so well-endowed with talent.
One of Sagnol’s most pressing priorities will be to restore Bayern’s killer instinct. Twice in a week – at home to Wolfsburg and in Berlin – the Bavarians carelessly have contrived to turn a two-goal lead into a share of the spoils, acts of self-harm which could and should have been avoided.
“For us, it was something of a frustrating result,” declared Sagnol in his post-Hertha debrief. “When you’re two goals to the good you have to play with more concentration and discipline. We paid the price for not doing so. Without concentration, we’re not the best team in Germany.”
Bayern’s decision to oust Ancelotti was justifiable on many levels. Under the Italian chef, fluid, attractive football only rarely was on the menu; after 15 months in charge, he had yet to settle on a recognisable organisational structure and for a coach with a track-record as an empathetic man-manager, his relationship with many in the Allianz-Arena dressing room was non-existent. The shambolic display in Paris simply was the final straw.
It’s equally true that Ancelotti was rather unfortunate. As a tactician he never was going to play the five-dimensional chess games of predecessor Pep Guardiola and had a mountain of personnel issues to wade through: the retirement this summer of club skipper and right-back Philipp Lahm and Spanish midfield cornerstone Xabi Alonso; Ribery and Robben approaching the end of the road and world-class keeper Manuel Neuer sidelined for many months with a twice-broken left-foot.
More high-end continuity coach than radical team rebuilder, Ancelotti essentially was the wrong man at the wrong place at the wrong time. Ex-Dortmund boss Thomas Tuchel arguably would be a far snugger fit.
What We Learned This Week
1. The dreaded vote of confidence
Despite his side losing six of their opening seven Bundesliga games, Cologne managing director Jorg Schmadtke continues to give his full backing to coach Peter Stoger. “My feeling is that the squad and the coaching staff are working well together,” said Schmadtke after losing 2-1 at home to RB Leipzig. “We’re lacking something but not much. You can’t blame the coach for that. I’m not one to change my opinion about someone from one day to the next.”
2. It never rains, it pours.
Veteran Bayern winger Franck Ribery is likely to be out until the New Year after damaging ligaments in his left knee. The 34-year-old Frenchman was injured in the second-half of the draw at Hertha Berlin and though he will not require surgery, will be unavailable for around ten weeks. This is Ribery’s last season under contract at Bayern.