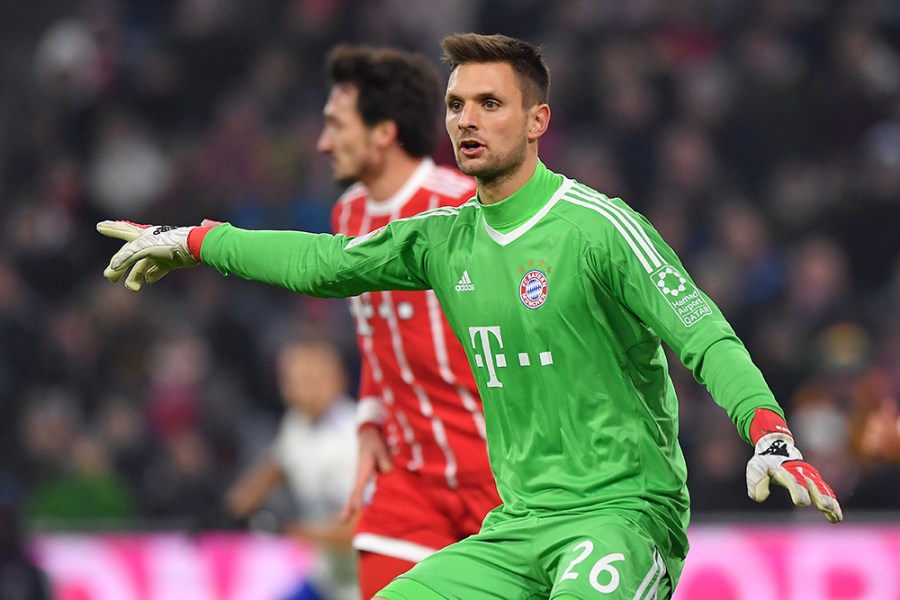 Doing a fine job of holding the fort while first-choice Bayern Munich keeper Manuel Neuer recovers from the complex foot injury which has kept him out since September, Sven Ulreich appears in touching distance of the most unexpected of prizes – a berth in Germany’s World Cup 2018 squad.

The solid stand-in recently was singled out for praise by Bundestrainer Joachim Löw (“In one-on-ones he is very good. We’ve got our eye on him.”) and with Neuer still some way off full fitness, the currently uncapped Ulreich should have all the game-time he needs to further stake his claim for the third Nationalmannschaft goalkeeping spot.

He will not be handed his dream ticket on a plate. In competition with Koln’s Timo Horn, Oliver Baumann of Hoffenheim and Bernd Leno (Leverkusen), he will have to earn it the hard way. But at least he’s in the shake-up, a quite remarkable turn of events for someone who in the previous two seasons, only managed nine starts for Bayern.

Cynics might argue say that the former Stuttgart custodian has had it all-too easy this term. That he has a world-class defence in front of him and precious little to do. However that would be doing him an enormous injustice.

The role of the understudy is never a simple one. It takes patience, loyalty, effort and a disposable ego. Not everyone can do it.

Time and time again these past few months, he has been Bayern’s saviour, the Man of the Match in Bundesliga wins in Stuttgart and Dortmund, the hero of the penalty shoot-out triumph over RB Leipzig in the German Cup and especially outstanding in the 3-1 Champions League victory at home to Paris Saint-Germain.

After looking decidedly shaky in the early part of the season –  notably in the 2-2 draw with Wolfsburg and 3-0 Champions League loss at PSG – he has come through with flying colours. A man of strong nerves, strong hands and a great deal of last line-of-defence abiity.

As illustrated by the three-year contract extension they have just given him, Bayern certainly appreciate him.

“What he has shown in his time with us is that both as a keeper and a man, we can always rely on Sven Ulreich,” declared Bayern director of sport Hasan Salihamidzic.  Well said.

Beaten 3-1 at the weekend in Bremen and now only four points clear of the relegation zone, Wolfsburg also have an injury crisis on the hands, with midfielder Yannick Gerhardt and centre-back Marcel Tisserand likely to be out of action for several weeks. Gerhardt has a badly damaged ankle, while Tisserand has torn a thigh muscle. Crisis time at the VW-backed club. “Everyone here knows the hour has come,” says coach Martin Schmidt. “It’s five minutes to midnight.”

2. Dortmund: the charms of the status quo.

Dortmund chief executive Hans-Joachim Watzke has hinted that caretaker coach Peter Stöger may be offered a permanent position at the end of the season. Since taking over from the sacked Peter Bosz in December, Stöger has yet to be beaten in the Bundesliga, picking up 15 points from seven games. “He’s an extraordinarily good coach,”  Watzke told Sky Deutschland. “We’re satisfied. If he keeps it up, we’d be stupid not to stick with him.”