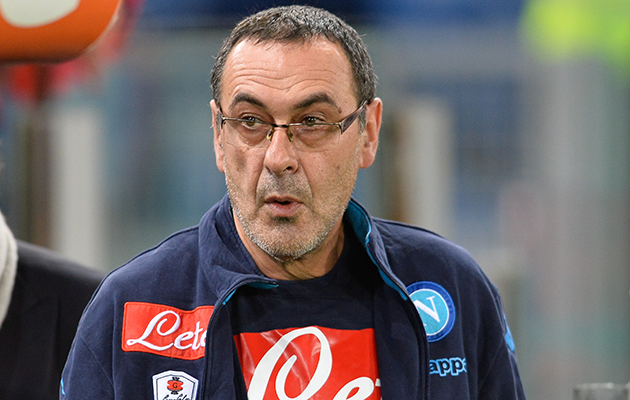 For once, there were no refereeing polemics, no contested penalty decisions, no fan violence, no post-match accusations, no flooded pitch and above all no half-empty grandstands.  Instead 53,000 fans in a packed San Paolo stadium and milliions on TV were treated to the engaging spectacle of an intense, fast flowing, dramatic game, well played (especially by Napoli) and particularly well refereed by Daniele Orsato.
Some of the match statistics for this one are revealing. For a start the league leaders and reigning champions managed only one shot on goal in the entire 94 minutes. That shot came from German Sami Khedira in the seventh minute when he gave the visitors the perfect start with a well worked “one-two” on the edge of the penalty area with Bosnian Miralem Pjanic.
Khedira’s well struck shot gave Brazilian goalkeeper Rafael no chance. This was a devastating start not just for Napoli but also for poor Rafael who was playing in his first Serie A game for more than two years, having been called in to replace the injured Pepe Reina.
What happened after that Khedira goal, though, beggars description. Rather that being overwhelmed by misfortune, Napoli took the game to Juventus in an utterly dominant manner. Possession statistics suggest that it was 60-40 for Napoli. The spectator’s impression was more like 90-10.
Napoli went at Juventus in a terrier-like manner, practically refusing to let the champions out of their own half of the field. Rarely has anyone seen a Juventus side so completely reduced to the role of a provincial team whose only strategy was to defend with eight men in and around their own penalty area.
Had it not been for poor and rushed finishing from Slovak captain Marek Hamsik and from Belgian striker Dries Mertens, Napoli would have equalised long before half-time.   As it was, the home team had to wait until the 61st minute before Hamsik atoned for his earlier misses with a splendid and much deserved goal.
At that point, Napoli tried to win the game but the closest they came was when Mertens hit the post, following a suicidal back pass to Gigi Buffon from Ghanaian Kadwo Asamoah. In the end, Napoli could only express regret whilst Juventus were clearly relieved to have taken a point, one that makes their sixth consecutive title look  more and more likely.
At this point, with eight games still to play, the Old Lady is six points clear of second-placed Roma and ten points clear of third-placed Napoli. The title is not in the bag but to have picked up a point in such difficult circumstances certainly represents a major step along the title-winning road.
“Tonight we took the game to them and we dominated Juventus,” commented Napoli coach Maurizio Sarri after the match, adding: “Juventus rarely struggle like that in Italy and that makes us feel proud of our game. The fact that we didn’t win just means that we will still be fuming on Wednesday night.”
Yes, indeed, because on Wednesday night, again at the San Paolo, Napoli will attempt the seemingly impossible in an Italian Cup Semi-Final 2nd Leg tie when they try to come back from a 3-1 first leg defeat in Turin. That Cup semi-final may have been key to Sunday night’s game.
After the 1-1 draw, Juventus coach Massimiliano Allegri candidly admitted that the Cup semi-final was more important for him than the league tie. His reasoning was clear. Even if he had lost last Sunday night, he would still be en route to winning the title, whereas defeat in Wednesday’s game will obviously mean the end of the Cup road.
For that reason, for example, with his eye on the Cup tie and even more on next week’s Champions League quarter final clash with Barcelona, Allegri rested two attacking players in Argentine Paulo Dybala and Colombian Juan Cuadrado, bringing them on only for brief second half outings. It is hard, too, to disagree with Allegri’s final thoughts when he said: “You also have to suffer to win league titles.”
One man who was probably suffering a lot less than most on Sunday was coach Gian Piero Gasperini, whose revelatory Atalanta side defeated Genoa 5-0 in Genoa to put themselves into fifth in Serie A and still in contention for a Europe League place next season. Atalanta has always been a terrific breeding ground for young players and this current crop are no exception.
Such as midfielder Roberto Gagliardini (now at Inter but he started the season with Atalanta), striker Andrea Petagna and midfielder Leonardo Spinazzola have all made their full international debuts this winter in the Gian Piero Ventura coached Italy.  Furthermore, Under 21 regulars such as defenders Andrea Conti and Mattia Caldara, have been called into the senior national squad.
The Atalanta statistics are enviable – 18 wins with a free scoring side in which six players have scored at least five goals.
For all that, however, Gasperini would probably be the first to admit that one of the great jewels in his Atalanta crown is the pocket-sized Argentinian schemer, “Papu” Gomez, scorer of a hat-trick against Genoa that brings his seasonal tally to a respectable 14. If and when the former San Lorenzo and Catania man moves on from Bergamo, he will be badly missed.