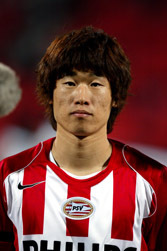 Kim Jeong-il works with the PSV player star on behalf of his main agent Chiel Dekker.

“We will inform the president of our company, Lee Cheol-ho, who is now in the Netherlands, of Park’s intention,” added Jeong-il.

The 24-year-old, who arrived in Europe in 2002 following an impressive World Cup campaign under then-Korean coach Guus Hiddink, has attracted plaudits in recent months following some eye catching displays in the Champions League.