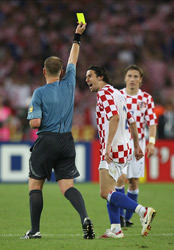 Graham Poll looks like he has refereed his last World Cup game after a series of blunders during during Australia’s dramatic victory over Croatia.

Fifa has warned referees they face being sent home if they underperform.

Poll, 42, had been tipped by some to be a contender to officiate at the final, but following last night’s display, that now looks extremely unlikely.

A Fifa statement read: “We had a first in the history of the World Cup when a player received three yellow cards – this is a little bit too much.

“In terms of the referee, this will be analysed and we cannot make any further statement on that.”

FIFA President Sepp Blatter added: “We had four officials and what is not understandable is nobody intervened.

“I’m not surprised about the reaction. There are people there and one of them should have intervened and run on to the field and said, `Stop, stop.”‘

“I place my trust in the referees committee. I think they have enough tact to deal with this case.

“We should not forget that Graham Poll in this previous matches achieved fantastic things.

“Of course, we cannot excuse it but we should understand it. Referees are human beings and human beings make errors.”

Fifa has warned referees they face being sent home if they underperform.

Poll’s biggest mistake was not realising that he had already booked Jospi Simunic when brandishing a yelllow card late in the game. The Croat was booked a third time on the final whistle.

Australia striker Mark Viduka said “I was sure it was his second yellow card.

“I asked Graham how many cards had Simunic received. Graham said only one. It looks like he got it wrong.”

Despite the errors, Viduka said he hoped Poll would not be sent home.

“Everybody makes mistakes,” he said. “Graham Poll is a top quality referee. I will not say anything against him.”