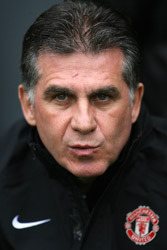 Portugal coach Carlos Queiroz has named a a squad of 24 for the 2010 World Cup in South Africa, of whom 23 will make the final cut.

The main surprises in Queiroz’s selection come in the form of Benfica goalkeeper Quim and Sporting playmaker Joao Moutinho, both of whom have been omitted from the list.

Queiroz has named a provisional 24-man squad for the World Cup as Real Madrid defender Pepe remains in doubt for the competition in South Africa. Should he be fit in time for the tournament, either Ze Castro or Ricardo Costa are expected to be left out.

Portugal have been drawn in Group G along with Ivory Coast, Brazil and North Korea.