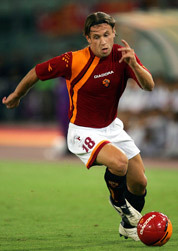 The Italian’s arrival at Real has been delayed by a wrangle over money he claims he was owed by his current club Roma.

However, with that issue now resolved, he is expected to finalise his move following completion of a medical.

Real will pay a fee of cut-price €5m to secure Cassano, and in the process, accept a huge loss on the €30m they spent when they signed the player from Bari in 2000.