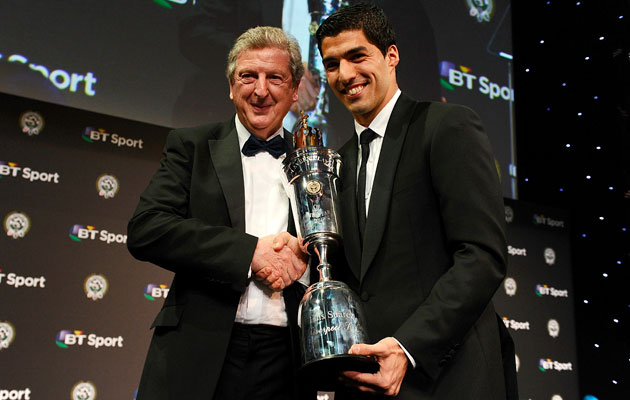 In the midst of what has been an amazing season for Luis Suarez it is a question worth asking.

The Liverpool striker has spearheaded his side’s unexpected push for the Premier League title, and leads the league in both goals scored and chances created.

Unquestionably, the Uruguayan has been the standout performer in England this season and recognition of his achievements came on Sunday when his fellow professionals named him the PFA Footballer of the Year.

In terms of his behaviour, there has been a noticeable improvement this season, with fewer pre-meditated fouls on opponents in what appears to be a concerted attempt to clean up his act.

Yes, there remain the irritating acts of simulation which have tainted his entire career, but this, remember, is a work in progress, akin to domesticating a feral cat. Given time, Suarez will eventually learn to use the litter tray – metaphorically speaking. Also, thus far, the striker has not bared his teeth in an attempt to gain an advantage, and for that, we, and in particular, Branislav Ivanovic, can all be grateful.

Of course, there is one infamous incident that continues to cast a shadow over his achievements in England, and which for many people remains an impediment when it comes to acknowledging, let alone celebrating, his gifts as a footballer.

Yes, the Patrice Evra saga, one, lest we forget, that Suarez has never apologised for and which remains a stain on his reputation.

But, following Sunday’s incident in which Barcelona’s Dani Alves ate a banana thrown on to the pitch, an opportunity to erase that ugly episode has presented itself and it is one which Suarez has grasped with both hands.

Several players have taken the opportunity to reiterate their opposition to racism by having themselves photographed whilst eating a banana. Among them is Suarez who posed alongside his Liverpool teammate, Philippe Coutinho, munching on a banana.

It’s either a blatant attempt to secure redemption for his past sins, or, to paraphrase Tom Lehrer when he heard that Henry Kissinger had been awarded the Nobel Peace prize, the death of satire.

I guess we’ll only know for sure if we see John Terry eating a banana.