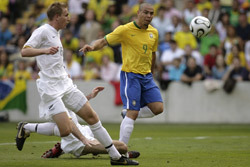 Brazil striker Ronaldo, who was forced to limp off during Brazil’s 4-0 friendly win over New Zealand on Sunday, is not worried about his fitness for the World Cup.

Ronaldo was forced off midway through Sunday’s 4-0 World Cup warm-up win because of blisters on his feet.

“There were three or four on my left foot and two on the right,” he told reporters. “I couldn’t go on.

“One of them was raw flesh. We tried to put on some more protection and a powder but there wasn’t enough time.

Coach Carlos Alberto Parreira said it was a minor injury and advised the media not to get carried away by the severity of the injury.

“We tried to do something at halftime but it continued to bother him and the doctor decided the best thing to do was to rest,” he said.

“Please don’t make a seven-headed animal out of this…it’s not a big issue. It will be alright in 48 hours.”

Ronaldo, who has not played a competitive game since limping out of Real Madrid’s 1-1 draw with Real Sociedad on April 8, scored the opening goal two minutes before half-time.

Parreira said Brazil’s only international in the month before the World Cup had given his team what they neeeded.

“Three goals would have been enough,” he said.

“The most important thing was that we created a lot of chances, their goalkeeper made three or four very good saves and we had more than 20 shots on goal.

Brazil open their World Cup campaign against Croatia in Berlin on June 13. They also face Japan and Australia in their first-round group.