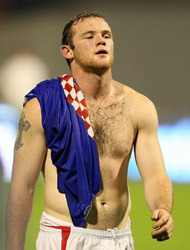 Wayne Rooney scored four goals in three appearances against Wigan last term. Click here to find out what the odds are that he will score this weekend.

A spokesman for Wayne Rooney has confirmed that the striker was involved in an altercation with an England fan after the 2-0 defeat in Croatia.

Rooney allegedly reacted angrily towards the fan after being verballly abused as he walked to the team bus.

“Any gesture Wayne may have made was directed to one fan, whose behaviour appalled the other England players,” said Rooney’s representative.

“Wayne has total respect for England fans. He accepts and understands their disappointment at Wednesday’s result.”

The Football Association said it was not aware of any particular incident.

FA spokesman Adrian Bevington told BBC Radio Five Live Sport: “I think what we will do is speak to Wayne’s spokesman.

“I am certainly not saying we are launching an investigation or anything like that.”

Bevington added: “I know it was quite heated as the players left the stadium to board the bus. The fans were naturally unhappy with the performance.

“I wasn’t aware of anything specific happening with Wayne. It may have been one fan only.”

However, on the FA’s own web site, England supporters verified the allegation.

“I saw Rooney flash the Vs,” Mark Lister claimed.

“However, in his defence, he came off the coach and was prepared to listen to one of the fans’ constructive comments about us following the team around the world and getting nothing back in terms of passion and commitment. Rooney’s reply was ‘You come and play then’, although I don’t think it was said in a negative way.”

England skipper John Terry admitted that he and his fellow players were taken aback by the level of abuse from some of the travelling fans.

“It wasn’t nice to hear the fans shouting things like they did but they travel a long way to watch us and deserve their opinion,” said the captain, John Terry.

“We do wear the shirt with pride. We just didn’t play well. We lost, we didn’t put in a good performance and we deserve a lot of the things we get. It’s very disappointing and very painful. We need to play much better than that. We just weren’t at the races.

“It has been two steps forward and one step back and it is really disappointing we have taken that step backwards. We need to be taking four steps forward rather than two, and really kicking on. The last two results have just not been good enough.”

Wayne Rooney scored four goals in three appearances against Wigan last term. Click here to find out what the odds are that he will score this weekend.