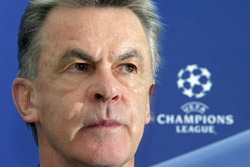 Arsenal scored their 1,000th Premiership goal while beating Reading and moved back to the top of the league. Click here for the latest outright betting!

Bayern suffered their first defeat of the season when they lost 3-1 in Saturday’s Bundesliga clash at Stuttgart, a result which left Rummenigge fuming having already criticised Hitzfeld’s tactics following the 2-2 UEFA Cup draw with Bolton on Thursday.

Hitzfeld took off stars Franck Ribery and Lukas Podolski after 60 minutes against Bolton as Rummenigge later said: “I am very angry. The audience have a right to see the best team.”

But lavished praise on Hitzfeld at the club’s Annual General Meeting on Monday night.

“I am happy and Bayern should feel lucky that we have such a good friend and trainer in Ottmar Hitzfeld,” said Rummenigge.

“I do not have a problem with Hitzfeld.

“He is the man reponsible for the team’s selection, determination and style of play.

“It is not about blaming people for what has happened, it is all about the success of Bayern.”

Bayern top the German league by a point from Werder Bremen and Hamburg, but Rummenigge said he has no doubts the Munich side will be top of the table when the Bundesliga starts the winter break on December 15.

Arsenal scored their 1,000th Premiership goal while beating Reading and moved back to the top of the league. Click here for the latest outright betting!