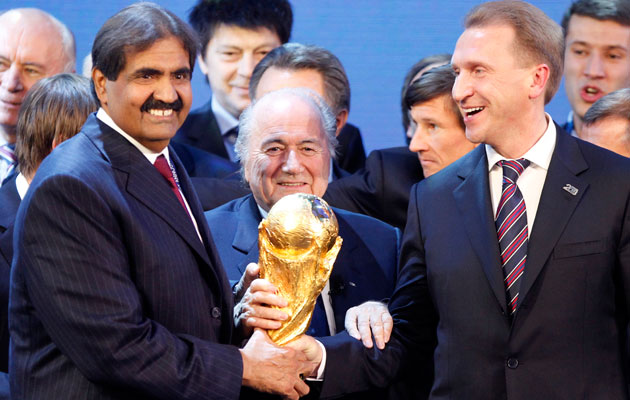 Russia and Qatar may have paid bribes to secure their World Cups, Sepp Blatter’s former special advisor has claimed.

“In FIFA, for many years, you could only reach your goal by taking dollars in your hands,” Tognoni told BBC Sport.

The bidding process for the 2018 and 2022 tournaments is the subject of a Swiss criminal investigation.
Asked if countries had any choice other than to bribe FIFA during the bidding process, Tognoni replied: “This speculation is permitted, yes.”

Domenico Scala, head of FIFA’s audit and compliance committee, said if there is evidence from either the US or Swiss investigations which shows the bid process was affected by bought votes, the “awards could be cancelled”.

However, Tognoni said he did not think the World Cups would be taken away from Russia or Qatar – arguing that the endemic corruption within football’s governing body meant that bribery was the only way for a country to secure the rights to stage the finals.

“Even if there is evidence that FIFA people were bribed, where is the problem – with FIFA, or the people who had no choice but to get the World Cup with bribing?” asked Tognoni.

Seven senior FIFA officials were arrested last month in dawn raids at a Zurich hotel, where they had been staying before the recent presidential election.

They are among 14 people charged by US prosecutors, who allege that bribes and kickbacks of more than $150m (£100m) were accepted over a 24-year period.

Blatter was re-elected president for a fifth term, but within days he announced his departure and called for fresh elections.