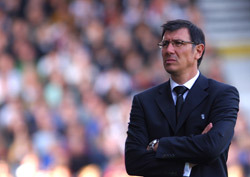 Fulham have announced that Lawrie Sanchez has left the club with immediate effect.

Following the club’s poor start to the season the club currently sit 18th in the Premier League and have won just twice in their 17 matches.

A statement released by the club read: “Following a run of disappointing results the club is languishing in the relegation zone of the Premier League table, and losing its Premiership status is a proposition that simply can not be contemplated at this stage in the club’s on-going development.

“The club is confident that it will find the right replacement to increase its chances of remaining in the Premiership, which is of vital importance.

“The club would like to thank Lawrie for helping the club through a difficult period at the end of last season, and thank him for his service over the last eight months.”

Ray Lewington and Billy McKinlay have been placed in temporary charge of first-team operations while the club search for a permanent replacement.

Former Fulham midfielder John Collins resigned from his position as manager of Scottish Premeir League side Hibernian on Thursday, and has already been linked with the Craven Cottage post.