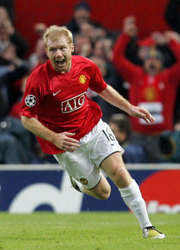 Eastlands is the stage for Saturday’s huge Manchester derby and Gavin Beech previews the big match.

The veteran midfielder, who has spent his entire career with United, will now remain part of the set-up at Old Trafford until at least the summer of 2011.

United are pleased that Scholes has now agreed to extend his association with the club.

“We are delighted Paul is staying on for another year,” manager Sir Alex Ferguson told the club’s official website.

“His form this year indicates his ability and his enjoyment of the game are as strong as ever, that’s every reason to stay on.

“There was talk about him wanting to retire, but when you see his enjoyment in training and playing you can see how much he wants to carry on.”

Scholes believes he is still capable of competing at the highest level and has expressed his pleasure at signing the new deal.

He said: “I am pleased to have signed for another year. I am feeling good and enjoying my football.

“I would like to thank the boss, the coaching staff and also the fans for their continued support.”

Eastlands is the stage for Saturday’s huge Manchester derby and Gavin Beech previews the big match.